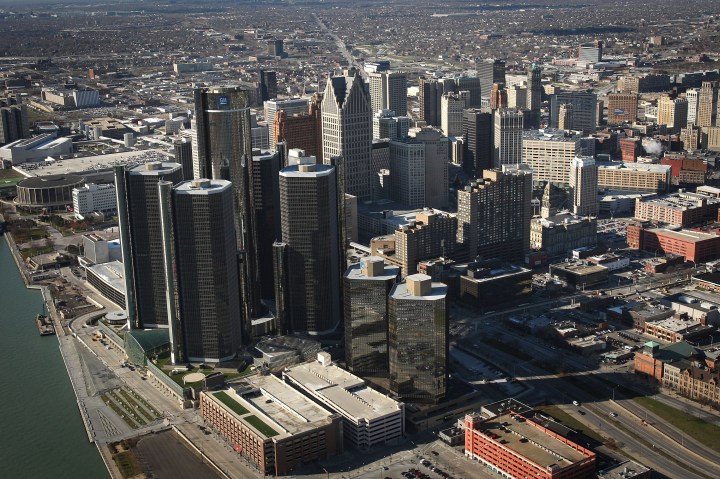 COPY
People from Detroit "really have all the gusto to be great entrepreneurs," says Courtney McCluney of Cornell. Spencer Platt/Getty Images

People from Detroit "really have all the gusto to be great entrepreneurs," says Courtney McCluney of Cornell. Spencer Platt/Getty Images
Listen Now

The city of Detroit has had a hard couple of decades dealing with crises like the departure of the auto industry, depopulation and corruption in local government. But there’s been a bright spot: The number of women-owned businesses in the city more than doubled from 2012 to 2019.

Courtney McCluney, an assistant professor at the School of Industrial and Labor and Relations at Cornell University, is conducting a multiyear study on Black women entrepreneurs in Detroit. She spoke with “Marketplace’s” Kai Ryssdal about entrepreneurship in Detroit. The following is an edited transcript of their conversation.

Kai Ryssdal: Tell me why, would you, you’re studying Black female entrepreneurs in Detroit specifically.

Courtney McCluney: Yes, a couple of reasons motivated us. One was that Black women have, over the last three or four years, been the fastest growing group of entrepreneurs in the U.S. So there are more of them starting businesses at higher rates, despite having disproportionate access to resources, including capital. And at the same time, a city like Detroit actually looks more like other cities across the world and in the U.S. And as much as people love to look at Silicon Valley as a model, it really is an unusual, unique, rare space. And when other places around the world have tried to replicate Silicon Valley’s success, they’re running into numerous issues that we are actually seeing in the city of Detroit. How can a place with very little resources, low population density, perhaps high rates of poverty, how is it that they are creating an entrepreneurial ecosystem? And I think that question lends itself to more possibilities for other places as opposed to a Silicon Valley model.

Ryssdal: You think Silicon Valley, right, and you think a white guy in a hoodie. You think Detroit, that’s not necessarily what comes up. Tell me about the the entrepreneurial infrastructure and ecosystem that you talk about there in Detroit?

McCluney: Absolutely. So Detroit is known for many things, and one of the things in their past was really all about developing assembly lines, product management, development and building out the middle class. When you think about small business owners and entrepreneurs, that’s also exactly what they’re trying to do. So the people in that ecosystem, they are very collaborative. They are also quite dedicated to the population that they’re serving. So a lot of the ecosystem builders are addressing issues around poverty and education and workforce development. This is a really cool space to see how we can create an ecosystem that helps to develop and address inequities that we see in society.

Ryssdal: Yeah. So to that point about bringing Detroit back, let’s talk about the city itself as a character in this narrative, because it is resource scarce. It has been through incredibly tough times the last generation or so. How does that influence the entrepreneur community in that city?

Native Detroiters are coming back

McCluney: Yeah, Detroit has gone through numerous forms of economic, financial, political devastation. And that has meant two things. One, a lot of people saw it as an opportunity to actually create more innovative businesses. I think of Carla Walker-Miller who started an energy company, when in the city, you know, those resources were being cut off and shut down because the city lacked the infrastructure at the time. There’s also been an overwhelming response from people who are native Detroiters starting to come back. Melissa Butler, who founded The Lip Bar and whose products are sold in Target, she opened up her first storefront in Detroit actually, last year. She was in New York at the time, and one of the things about Silicon Valley, New York City, all these other larger markets, is that you’re competing at such a high level because there’s so many people in the race. So we’re seeing this increase in population density, especially of people who have gone away to get higher degrees, higher education and come back and really start to rebuild the city.

Ryssdal: You obviously spent some time in Detroit back when we all could travel. The stories that you heard, I mean, what were they? How hard was this for these women to do, and how do they stick it out, right, because it’s got to be tough?

McCluney: Oh, my gosh, so tough. All of the Black women that I met in Detroit are amazingly resilient. And there was this really passionate desire to see the city not just come back and be reborn, but also to stay true to its roots and to be Detroit made. There’s just so much pride in that city, regardless of, you know, people going to high schools that were closed down and not having water for, you know, months at a time. But when you think about what makes a great entrepreneur, it’s someone who has the ability to endure risk and to bounce back from hardships. And that is what people from Detroit have had to experience. So they really have all the gusto to be great entrepreneurs in that way.