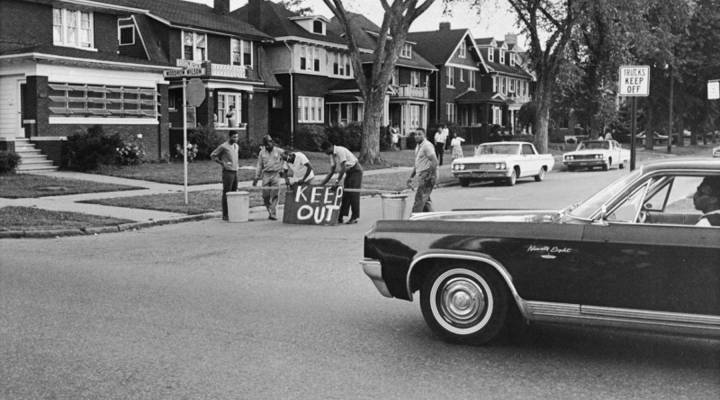 COPY
Aaron Foley says he heard about the Detroit race riots at home, and “hardly anybody wanted to really go in depth and talk about.” Above, a group of men in Detroit construct a barricade to keep their street safe during the 1967 riots. Photo by Hulton Archive/Getty Images

Aaron Foley says he heard about the Detroit race riots at home, and “hardly anybody wanted to really go in depth and talk about.” Above, a group of men in Detroit construct a barricade to keep their street safe during the 1967 riots. Photo by Hulton Archive/Getty Images
Listen Now

Fifty years ago yesterday, Detroit erupted in flames. The 1967 uprising in Detroit is the subject of a new Kathryn Bigelow movie coming out this summer. And Hollywood is not the only one focusing on the Motor City. We’ve been hearing for some time now about Detroit’s downtown renewal — the artists moving into abandoned lofts, the urban gardens rejuvenating the city streets.

So what can we make of the birthplace of Motown these days? Marketplace host Kai Ryssdal invited native Detroiter Aaron Foley to the show to talk to about what’s going on in his city. Foley recently started a new job — he’s chief storyteller for the city of Detroit. His new job is all about elevating stories told by and about fellow Detroiters, especially ones about neighborhoods outside of downtown where people have lived for decades.

Kai Ryssdal: Interesting job title you picked it yourself, I understand.

Aaron Foley: I did. The original job title was going to be something along the line of director of content or executive or something or another, and I said, “Well, if I’m telling stories, then I should just call myself a storyteller.”

Ryssdal: Yeah of course. You are obviously from Detroit. Tell me, just to start people off with some idea of what you do, tell me the story of the neighborhood you grew up in.

Foley: I grew up in a neighborhood called Russell Woods, and it is on the west side of Detroit. I grew up in a brick house. Lot of brick homes in the neighborhood, and that’s something Detroiters really liked to talk about is the number of brick houses. We love brick. And a lot of community and family over there; lots of senior citizens. Years ago it was a mostly Jewish neighborhood and then it became a mostly black neighborhood. I loved growing up there. I had kids in the neighborhood that I went to school with over there. I used to catch the Dexter bus everywhere. There was a corned beef place called Dexter Esquire that was there for years. They had some of the best corned beef in the city.

Ryssdal: Oh, that’s great. So the reason I asked you to tell me that story is because the story mostly you hear about Detroit nowadays, once you’ve gotten past the depopulation and the urban problems that it’s been having, is the rejuvenation of the downtown core with the artists and everybody move in. You don’t hear the stories of the neighborhoods.

Foley: You definitely don’t. I mean, downtown and midtown only encompass about 7.2 square miles of the city. But our city as a whole is about 143. So there’s about, you know, last census put us around 680,000 residents. That’s 680,000 stories waiting to be told. Not all of them come from downtown. And I always say that Russell Woods, where I grew up, looks almost exactly the same as it did when I was a kid. A lot of places persevered in the last, you know, decade or so after all this turmoil, and now is the time I think to start talking to people there.

Ryssdal: I wonder if part of the story of the 50th anniversary of the riots is remembering what the riots were about.

Foley: It is. And one of the things I did not realize until I was older is that we didn’t talk about it. And I went to Detroit public schools and it wasn’t taught to us. Maybe it was just the particular school track I was in. I can’t speak for all Detroit public schools. But I talked with several of my friends, and I was like, “Well, how did you hear about the riots? When did you first hear about it?” We heard about it at home, and hardly anybody wanted to really go in depth and talk about it. But a lot of us did not really get this information, get the full story, until we were much older. And then we have questions. Do we call it a riot? Do we call it a rebellion? One of the toughest parts for people my age is the memories are fading. This is 50 years ago now. For a lot of people this will be new, because it’s one of those things that’s so much a part of our history. But we didn’t talk about it to the extent that we could have, in my opinion.

Ryssdal: This is tricky question, but where does race fit in telling the economic story of Detroit?

Foley: Race doesn’t just fit into the story, it shapes the entire narrative, right? Race is the cornerstone, the foundation of the way Detroit is the way it is now. And if you look at our demographics, the suburbs are mostly white, but the city core is mostly black. Now I grew up in a black city, and I’ve seen, you know, black mayors, black business owners and things like that. But in the long run, seeing that we’re still kind of suffering from some of the devastation that happened like years before I was born, how do we fix that?

Ryssdal: Why does Detroit need a storyteller right now?

Foley: One of the bigger things that happened in the last couple of years is that we saw a lot of media coverage about the typically young, white 20-something millennial moving to Detroit and saying sort of these off-hand things about Detroit is a blank canvas, Detroit is a blank slate. And lots of attention is given to the budding entrepreneur who “takes a risk” on Detroit. But again, you have mostly people of color, immigrant stories, that are being ignored.