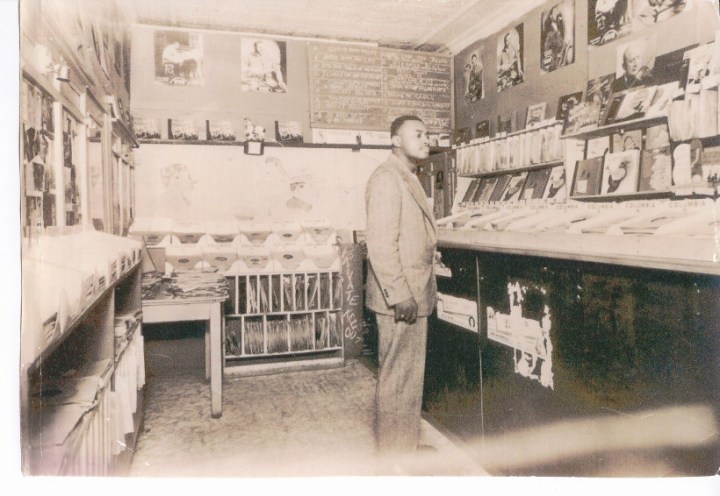 COPY
Joe Von Battle inside his record shop on Hastings Street in Detroit. Photo from the Collection of Marsha Music
Race and Economy

Joe Von Battle inside his record shop on Hastings Street in Detroit. Photo from the Collection of Marsha Music
Listen Now

The story of the economy is also a story of place. Marsha Music is the author of “The Detroitist: An Anthology About Detroit.” Music has lived her entire life in Detroit and Highland Park, which she describes as a “city within the city of Detroit.” Music spoke about her city and the overlaps of the city’s history with that of her family.

Below is an edited transcript of Music telling her story and several stanzas from her poem, “The Bottom, the Valley and Hastings Street — An Elegy in Rhyme.”

My name is Marsha Music, and I am a writer. I call myself the Detroitist.

Detroit is such an amazing muscle. It is a city of transcendent strength, of ability, of work. And the traumas here have been so great.

My father was a man by the name of Joe Von Battle. He opened up a record store in 1945 on old Hastings Street, which was the main thoroughfare of an area called Black Bottom. That street was quite lively and dynamic, particularly in those days. People from nationalities everywhere came to live in Detroit. Detroit is a city of nations. And many of them began their sojourn in the Black Bottom area, particularly immigrants.

So I grew up in and around the record shop. My mother would send us on chores — sweeping the floors and stacking records and helping Dad. But most of the time, what we really did was dance and listen to music.

During that period of time, there were all manner of efforts at what they call “urban renewal,” including the freeway projects. Generally, the freeway systems were built through Black neighborhoods that were regarded as expendable or decayed, and not worthy of preservation. And Hastings Street was one of those streets that was obliterated by the development of the Chrysler Freeway. So in 1960, my father got the word that he would have to move.

Many of the entrepreneurs that were compelled to leave ended up becoming quite prosperous, that the move itself ended up being their springboard, whereas many of the Black entrepreneurs, particularly because they were restricted spatially and could not move to the suburban areas where these other entrepreneurs were able to plant themselves, did experience the ending of their businesses.

My father was never quite the same once he moved. I believe that that move from Hastings Street to the other area of town, the 12th Street area, marked a real shift in his disease of alcoholism.

After his death, I was very overwhelmed with just the years of growing up with an alcoholic parent. And I would run into people who knew him back in his old days, maybe at the grocery store, and they would say, “You know, your dad was a great man, you really need to write about him.” And I just blew it off.

But there was a kernel in me that remembered very well when I was a child just how dynamic my father really was. And I remember that record shop and what it really represented.

Music also shared several stanzas from her recent poem, “The Bottom, the Valley and Hastings Street — An Elegy in Rhyme.”

Click the audio player above to listen to the story and poem.

A version of Music’s story was included in the hourlong Marketplace special “The Economy, Reset.” Listen to it here.