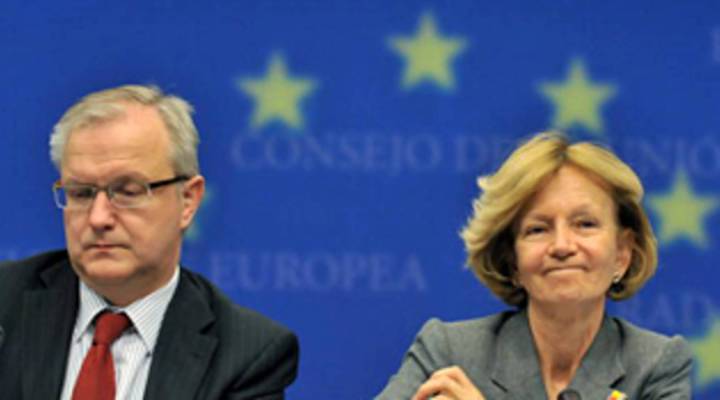 E.U. commissioner for Economic and Monetary Affairs Olli Rehn, left, and Spanish Finance Minister Elena Salgado, right give a joint press conference at the end of the ECOFIN council's debt session at the E.U. headquarters in Brussels -- May 10, 2010. Georges Gobet/AFP/Getty Images
Listen Now

Investor response to the E.U. bailout of Europe was enormous: the Dow surged over 400 points this morning.

Sam Stovall, chief investment strategist at S&P Research, said the E.U. bailout was effective because of the way it handled the big picture: “I think they’re excited for the same reason that they were disgruntled last week: the European Union’s efforts back then were too little, too late, too disjointed. But now because of a weekend of wrangling they finally got their act together — and actually got ahead of the curve because they put together a financial package not only for Greece, but for the other potential bailout necessities in the Mediterranean.”

But banking consultant Bert Ely felt it wasn’t a market solution fit to last. “This is being viewed as a way to keep the markets functioning, but quite frankly it’s merely a short-term page, it is not a long-term solution.”

UPDATE: The Fed and Bank of England have also pledged their support to Europe’s bailout.

Steve Chiotakis: Stocks in Europe and elsewhere overseas are marking gains not seen in a long, long time. It’s reaction to a $1 trillion European Union plan adopted today. E.U. finance ministers hope it’s going to prevent a debt crisis from undermining the Euro and spreading to another global financial crisis. The three-year package includes money from Eurozone members and the International Monetary Fund. David Buik is with BGC Partners, he’s with us now from London. David, good morning.

Chiotakis: Where are you right now?

Buik: This is the reaction to the extraordinary decision taken — very positive one — by the ECB, the IMF and also the European Union. And I’m standing on the corner of the interest rate swap desk at BGC Partners here in Canary Wharf in London. And it’s pandemonium here, but it’s actually endemic of the first positive signs that we’ve seen.

Chiotakis: Hey David, haven’t there been earlier rescue plans? What makes this one different? Is it just that it’s more money?

Buik: I think it’s really the frist time that we’ve seen unity from the European Union. There have been dissenting voices during the coarse of the last three months, which is really one of the reasons why the Euro’s in a parlor state, and why we’ve seen the European debt market look so awful. I mean they must have known for some time that some countries are in better shape than others after the credit crisis from two years ago. But because people always have their own agendas — and as I say, the European Union has been known for its political prowess rather than its economic prowess. And this is the first time we’ve seen a coordinated approach to what could be, and could have been and incredibly dangerous situation.

Chiotakis: David Buik, thank you so much for being with us, from BGC Partners, joining us from the midst of some excitement over there in Europe. We appreciate it.

E.U. commissioners approved a Europe-wide bailout Monday morning of $957 billion in a move meant to send a U.S.-style message of “shock and awe” to the markets. Early market trading indicates the move has made a strongly positive impact, with the euro rallying at $1.30 against the dollar, according to the Financial Times.

Marketplace will talk to analyst David Buik about Greece’s reaction to the bailout and what may happen in the longer term.