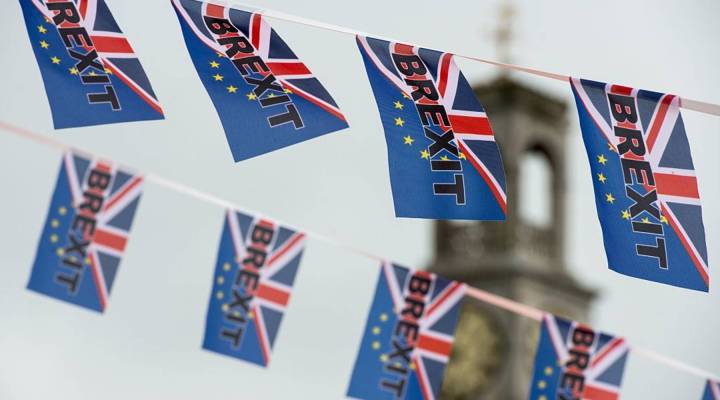 COPY
Pro-Brexit flags fly from a fishing boat moored in Ramsgate on June 13, 2016. Britain's opposition Labour Party today scrambled to make the case for Europe to its members as world stock markets slipped amid concern over a British exit from the EU in a knife-edge referendum next week. CHRIS J RATCLIFFE/AFP/Getty Images
Brexit

Pro-Brexit flags fly from a fishing boat moored in Ramsgate on June 13, 2016. Britain's opposition Labour Party today scrambled to make the case for Europe to its members as world stock markets slipped amid concern over a British exit from the EU in a knife-edge referendum next week. CHRIS J RATCLIFFE/AFP/Getty Images
Listen Now

Update: The United Kingdom voted to leave the European Union after this story was published.

Global market volatility has increased with the approach of the June 23 “Brexit” vote, in which Britons will decide whether to remain in the European Union or leave it. Public opinion polls and betting markets in the U.K. have tightened in recent weeks, compared to earlier in the spring, when the “remain” side was leading strongly.

The 28-nation European Union economic bloc is the U.S.’s largest trading partner, and a win for the “leave” side in Briton could have a significant impact on American businesses that ship to and from, and have operations in, Europe and the U.K. Meanwhile, the prospect of Britain leaving the E.U. has affected trans-Atlantic trade and prices for consumer goods sold in the U.S.

“We’ve seen huge fluctuations in the British pound,” said Debe McCaul, owner of the Scottish Country Shop in Portland, Oregon. “The financial markets don’t like change and they don’t like uncertainty.”

McCaul said the exchange rate for the British pound and the U.S. dollar is now lower than at any time since she opened the store in 2003. So her American shoppers can find bargains on items she stocks regularly, such as Scottish shortbreads, teas, tartans and bagpipes.

But if Britons actually vote to leave the E.U. on June 23, financial analysts predict the impact on the U.S. economy will go well beyond a temporary wave of cheaper British imports. Currency, equity and debt markets may remain in flux for months or more as the U.K. and E.U. renegotiate their economic and political relationships. International and bilateral trade treaties involving the U.K., the E.U., the U.S. and other countries would in many cases need to be renegotiated as well.

John de Clue, chief investment officer at the Private Client Reserve at US Bank, said a British vote to leave would likely weaken support elsewhere in the world for increased global economic integration. And that might in turn undermine U.S. efforts to implement pending free-trade deals with America’s European and Asian-Pacific trading partners.

“It casts a pall on very important efforts to reduce trade barriers and tariffs,” said de Clue. “And so now you have another problem with global growth.”

Tamim Bayoumi, senior fellow at the Peterson Institute for International Economics, predicted that a “leave” victory would set in motion a scramble among U.S. companies operating in Europe.

“U.S. multinationals, for example, which have manufacturing in the U.K., might find it much more difficult to export to the European Union,” said Bayoumi. He also pointed out that multinationals will have to deal with changing rules for trade, immigration and labor-flows across borders. For instance, the status of the border between Northern Ireland and the Irish Republic might change, and Scottish-independence advocates might again push for Scotland to leave the U.K. so it could remain part of the E.U.

Bayoumi said that a significant long-term risk to the U.S. and global economy would arise if a British vote in favor of Brexit encouraged more anti-E.U. sentiment on the Continent and led to exit votes in other E.U. countries as well.