Low-income benefit most from degree

Low-income benefit most from degree

Kai Ryssdal: Today’s a very big day for high school seniors. Many of them are going to find out where they might be, and where they’re definitely not going to college. Plenty of rejoicing, lots of disappointment and loads of parents coming face to face with the financial reality of higher education.

Given the economy the past couple of years, there are a lot of seniors and their families who simply can’t afford school right now. But a study out today shows that people least likely to go to college are the ones who stand to gain the most. From the Marketplace Education Desk, Amy Scott reports.

AMY SCOTT: A college graduate earns almost twice as much on average as someone with just a high school diploma. But the study out today says for students from disadvantaged backgrounds, a college degree can be even more valuable when it comes to income.

JENNIE BRAND: For people who come from disadvantaged backgrounds, college really has to matter in terms of the economic payoff. They have to overcome considerable odds to attend college, and it really has to pay off.

Brand says these students are more likely to major in business, for example. People from privileged backgrounds, for whom college was a given, might be more inclined to choose less lucrative fields like the social sciences. Brand based her conclusions on a study that followed a group of young people starting in 1979.

Patrick Callan is president of the National Center for Public Policy and Higher Education. He says a college degree is worth even more now than when the study began.

PATRICK CALLAN: Used to be if you didn’t go to college, you could go get a job in a factory and if you belonged to a union, buy a house in the suburbs and send your kids to college. That’s not true anymore.

Callan says the study shows how important it is to make college more accessible and affordable. He says tuition at four-year public colleges went up 6.5 percent last year when median family income fell. 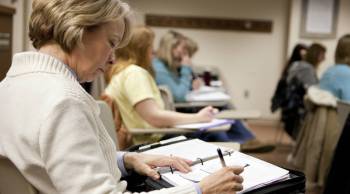 Undergrads are getting older, according to a new study