Can you trust a banker for the Senate?

Can you trust a banker for the Senate?

Steve Chiotakis: Wall Street’s been getting a lot of the blame for the country’s economic woes. Bankers don’t exactly have the best reputation at the moment. Now imagine being a banker and seeking a seat in the U.S. Senate. That’s the case in Illinois. Tony Arnold from Chicago Public Radio reports.

Tony Arnold: Democrat Alexi Giannoulias has been the Illinois state treasurer for the last four years. But before that, he was the chief loan officer for his family’s community bank, called Broadway Bank. Giannoulias has said the FDIC may have to take control of Broadway, and the bank’s downfall has mostly been because of bad loans.

Mark Kirk: Alexi Giannoulias engaged in the same kind of reckless lending that brought our U.S. economy to its knees.

And Giannoulias has his defenders, like Illinois’ senior senator Democrat Dick Durbin.

Dick Durbin: There are good bankers. You know? There are people who really try to do a good job. And there are some who are not. We ought to have the good sense to know the difference.

Giannoulias has a slight edge over Mark Kirk in the most recent poll. Alan Gitelson says that doesn’t mean voters are fully on board. Gitelson teaches political science at Loyola University.

Alan Gitelson: Roughly 56 percent of the voters in Illinois are at least somewhat reluctant to support him because of his history of being a banker.

As for potential voters like Chicagoan Jim Hannan, he says despite the banker baggage – some financial experience might actually help a political campaign.

Jim Hannan: They might have a good idea of how to manage the money then, you know. Hopefully. 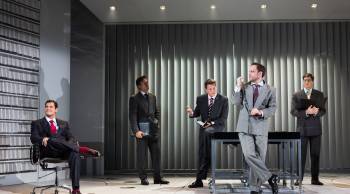