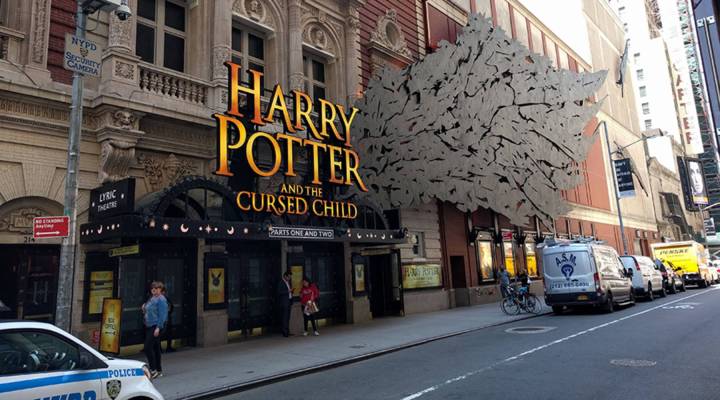 COPY
"Harry Potter and the Cursed Child' is one of Broadway's blockbuster hits. Ashley Milne-Tyte for Marketplace

"Harry Potter and the Cursed Child' is one of Broadway's blockbuster hits. Ashley Milne-Tyte for Marketplace
Listen Now

The annual showcase of all things Broadway — the Tony Awards — takes place on Sunday. But even before the trophies get handed out, the New York theater industry has a lot to celebrate. It just had its most successful year on record, with record attendance and grosses of nearly $1.7 billion.

Recently high schooler Anna Lee from central Virginia stood in line with her family and hundreds of other people waiting to get into the Lyric Theater on West 43rd Street. They were about to see “Harry Potter and the Cursed Child, Part One.” Anna said she’s been reading the books since she was six years old.

The two-part play was a surprise for Anna’s 17th birthday. Her mother, Jill Lee, said it’s an expensive celebration this year as tickets are highly sought after.

She bought them from a ticket company via a link on the theater’s website, not from a re-seller. And to be clear that’s $300 per person for part one of the show, and the same price for part two, which the Lees were scheduled to see later that night. That’s a $2,400 theater trip for four people.

The trade group The Broadway League surveys theater-goers. It has found that the majority of ticket buyers are like the Lees, tourists from outside the region. And plenty of them are willing to pay top dollar to see the Potter show and some of Broadway’s most successful musicals. The Broadway League says almost 10 percent of this year’s grosses came from the blockbuster “Hamilton” alone. Fans have paid more than $800 for tickets to the hit show.

Laurence Maslon is an arts professor at NYU’s Tisch School of the Arts. He said the premium ticket is a fairly new addition to Broadway economics.

“I think Broadway producers finally cottoned on to fact they could offer great seats to a great show when you wanted them,” he said. “And it was OK to charge extra money for them.”

It’s also a way for producers to claw back some of the money that had been going to re-sellers, who routinely inflate prices; now, producers get to keep that profit for themselves.

The average ticket price on Broadway is about $123, although you can often get cheaper tickets on the day of a show.

“Putting on a show on Broadway is incredibly expensive,” said Elisabeth Vincentelli, a longtime New York theater writer and critic. “It’s unionized, which I don’t mean to say that in a bad way, but it’s expensive,” she added.

About 30 percent more expensive than putting on a show in London’s West End, according to Charlotte St. Martin of the Broadway League. She said it takes a long time for a hit show to recover its costs.

“A show that’s doing very well still has to run at least two years to not only pay their expenses but to pay back their investors,” she said.

The producers of Harry Potter spent a whopping $68 million just to bring it to Broadway. That includes the cost of renovating the theater to look like Hogwarts, Harry’s fictional boarding school, complete with dark wood paneling and phoenix sconces on the walls.

Vincentelli likens the Potter show to a popular amusement park ride. Generations of kids line up to try them out.

“They go on for years. And Potter could do that,” she said.

And make a lot of money for its producers.

Laurence Maslon said blockbusters like “Phantom of the Opera,” “The Lion King,” and “Wicked” — all still running — have become like the Empire State Building or the Statue of Liberty, part of the New York experience.

“And for a show to transmute from being a theatrical piece of intellectual property to a cultural lodestar for the most popular city in the world … there’s no way to anticipate that kind of gift for the producers behind that,” he said.

It’s too soon to tell what kind of gift the Harry Potter play will be. But its producers hope it will conjure up attendance – and profits – far into the future.