Immigration to U.S. slows to a trickle

Immigration to U.S. slows to a trickle

Kai Ryssdal: Immigration from Mexico has slowed dramatically over the past couple of years. That’s according to a new report out today from the Pew Hispanic Center. Mitchell Hartman reports, the economy on both sides of the border is a major factor in the human ebb and flow.

MITCHELL HARTMAN: The Pew report tracks two key measures: how many Mexicans are coming here, whether legally or illegally. And how many are going back home.

Pew researcher Jeff Passel says that flow becomes a trickle in every recession. The decline is more pronounced this time around because so many construction and manufacturing jobs have disappeared. Passel says the news gets back to Mexico, and fewer economic migrants risk the trip.

PASSEL: We haven’t seen flows this low in probably 20 years or more.

But Passel says even though there are fewer jobs here, he’s not seeing an increase in people returning to Mexico. Paul Harrington of Northeastern University’s Center for Labor Market Studies thinks he knows why.

PAUL HARRINGTON: A very wise immigration lawyer once said to me, “A new immigrant’s worst day in the United States is better than his best day at home.”

Harrington points out, it’s expensive to go back and forth across the border. And there’s not much to go back to anyway.

HARRINGTON: I think Mexico’s really been roughed up both economically and actually politically. So as a result, I think the relative conditions are still relatively better here, even though things have gotten much tougher.

Harrington says jobless Mexicans who stay here are probably just scraping by, waiting for the economic recovery. He says they’re ready to take whatever low-wage, unskilled work they can find. So they’re not making room at the bottom-end of the labor market for unemployed Americans. 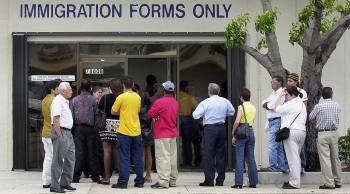