Shell still forging ahead with production

Shell still forging ahead with production

Christopher Werth: Shell’s earnings comes on top of news yesterday that profits at BP had slid 62 percent. Oil companies that recorded record profits last year are reeling from lower demand, the falling price of crude oil, and the fact that the cost of doing business just keeps rising.

But Nick McGregor, an analyst with stockbroker Redmayne Bentley, says no one should feel too sorry for Shell:

Nick McGregor: Shell’s numbers are actually pretty good. They’ve come in ahead of consensus this morning, and it does look as if they are willing to keep putting money into future production.

Shell invested about $7 billion in new production in the last quarter, and plans to up that to $31 billion by the end of the year. But the company faces continuing security challenges with its operations in Nigeria, and OPEC restrictions that have come as a result of lower global demand. 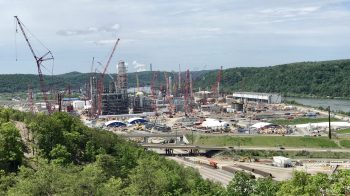