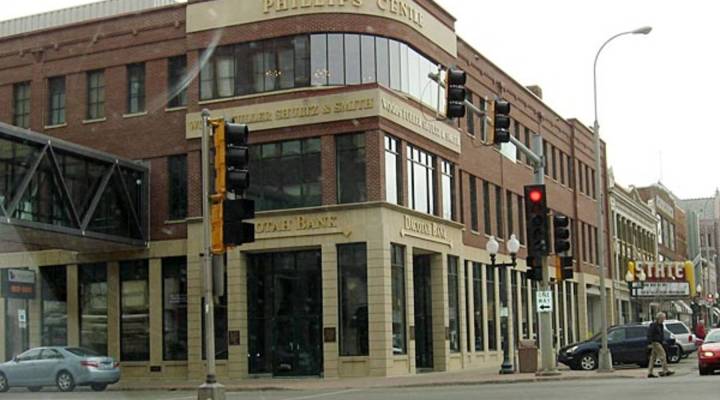 Kai Ryssdal: We’ve all got our hands full dealing with a recession and financial crisis brought on by millions of mortgages going bad. But out there in the future somewhere might be another credit-induced problem, thanks to those little pieces of plastic we all carry around in our wallets.

Yesterday, we took you to Sioux Falls, S.D., and explained how a change in lending laws there brought banks and their credit-card businesses running. Millions of bills and applications going out and billions in payments coming in to processing centers that needed thousands of workers. Now though it’s payback time for Americans who binged on plastic. And for the industry that fed their addiction. In part two of her series on the town that credit built, Marketplace’s Stacey Vanek-Smith has a look at how the credit crisis is hitting Sioux Falls.

STACEY VANEK-SMITH: On a frigid South Dakota morning, dozens of people file into the local community college. They are here to take a class on how to find a job.

Greg Johnson is with the South Dakota Department of Labor. He used to offer this class once a month. Now he’s running four classes a week, for hundreds of job-seekers.

JOHNSON: Sioux Falls, up until a few months ago, was a super-strong place for employment. Employers constantly clamored for more employees, more employees.

Banks needed them to work in the booming credit-card industry. Citibank, Wells Fargo, HSBC and dozens of others began moving their card operations to Sioux Falls in the ’80s. They wanted to take advantage of the state’s lax usury laws, which let banks charge whatever interest rates they wanted on credit cards. Banks jacked up their rates and plastic became their main profit-engine.

Sioux Falls was transformed from a meat-packing town into the credit-card industry’s back office. University of South Dakota economist, Ralph Brown.

RALPH BROWN: From 1980 to 2008, its population has increased by 67 percent. Job growth has been even faster than that.

The more debt the country took on, the more work there was in Sioux Falls. Financial services now account for 17,000 jobs in the city — that’s 15 percent of the population. But times are changing. Debt-heavy Americans can’t pay their credit-card bills, default rates are soaring and banks are starting to lose money on plastic. Again economist Ralph Brown.

BROWN: We’ve seen many job cuts, and we think there will be a basic resizing of the financial industry. So that’s a concern for Sioux Falls.

CATHY: It seemed like we had kind of missed it. All the sudden, we got hit real hard.

That’s Cathy, she lost her job as a bank administrator in December, when Citibank laid off 200 people in its Sioux Falls office.

CATHY: I’ve applied at different places, but I haven’t seen really a whole lot of openings. And the competition is so great. It’s hard to know if you’re going to be the one that stands out.

To stand out, Cathy’s taking the Labor Department’s job-search class. She wants to fine-tune her resume and get some interviewing tips.

Faking a good attitude is new territory for Sioux Falls, which has had one of the lowest unemployment rates in the country for years.

BRIAN BJERKE: Suddenly we start to know people who have been laid off. And that’s not supposed to happen around here.

Brian Bjerke has lived in Sioux Falls for more than 30 years. Over a piece of chocolate silk pie at the Philips Avenue Diner, he says his marketing firm has taken a hit. And so has every other local business.

BJERKE: It used to be, well, how are things going? Oh, I’m so busy, I can’t believe how busy I am. Now it’s kind of like, well, I’m glad I have a job. There’s a lot of anxiety that’s kinda a subtext of everything that we do these days.

Brown: Yeah, we’ve got a rough year or two ahead of us. But in my view, Sioux Falls will recover.

Brown points out that health care now employs just as many people as financial services. But even that shift owes a debt to the credit-card business. Two years ago, local entrepreneur Denny Sanford donated $400 million to the local hospital. It was the biggest gift ever to a health-care facility and it’s turning Sioux Falls into a major medical center. Oh, and Sanford? He made his money in the credit-card business.