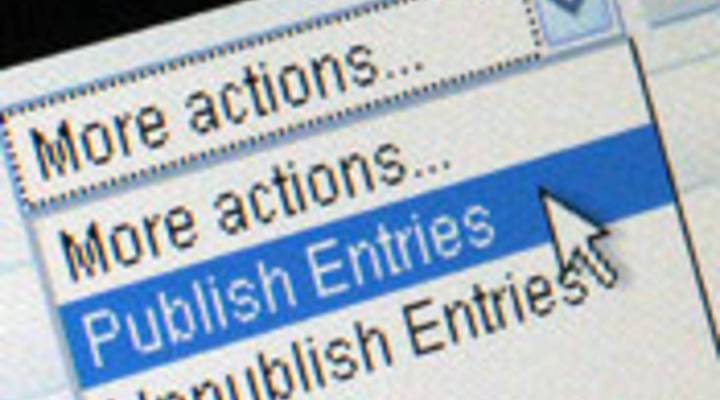 Tess Vigeland: Every so often we’ve been checking in with a group of personal finance bloggers. Turns out the last time we all talked was in late September. It was a different world back then. The bank bailout was just a glimmer in Hank Paulson’s eye. The Dow was still hovering around 11,000.

Times have changed. And we’ve brought the bloggers back to talk about all those changes. Steve blogs at BripBlap.com. Lynnae writes at BeingFrugal.net. And you’ll find Jim at Bargaineering.com.

Jim, any initial thoughts on what’s happened since late September?

Jim: It’s been crazy. Way back in September and October and November, when the economy, you know, was slowing down, but people hadn’t really cemented the idea that we were in a recession. Everyone was focused on the stock market and how it was, you know, one day it would be down 300 points, then up. Then down. You know, my readers were saying, you know, what should I do with my 401(k)? But in the months that have been since, everyone’s now worried about what should I do because I’m afraid I might lose my job? You know, it’s a shift away from “Oh, my 401(k)s down,” to “I might lose my job and not even have a 401(k) to contribute to.” And I think that’s led to a lot of, you know, nervousness.

Vigeland: Lynnae, what are your thoughts on what’s happened since we last spoke in September?

Lynnae: It’s been really hard to watch. I’m getting a lot more e-mails and comments lately about people who have lost their jobs. And where I live, too, I know a lot of people who are really struggling. And, being as we went through this a couple of years ago, I know how hard it is. And it’s hard to see people go through that.

Steve: Well, it’s interesting to hear that, you know, that’s what people are worried about — moving from worried about their stocks to worried about their jobs. I do contract consulting, and I’ve been out of work since right after Thanksgiving. So it’s been interesting for me because I’m actually living the headlines. I guess I would say that it’s also been reassuring to me that all of the stuff that I have preached, and a lot of other people preached about — making sure you have rainy day funds and a sustainable lifestyle — is really paying off now. That I didn’t have to panic the second I lost my job.

Vigeland: So, you’re living your own advice column?

Steve: Yeah. I wish I wasn’t. But if nothing else, it’s probably going to be a . . . you know, continue to be good fodder for blog posts.

Vigeland: Well, speaking of blog posts, I wonder given this shift in what people are talking about, are you noticing that there’s a difference in what kinds of things on your cite are popular? You know, from what it was juts a few months ago? Lynnae?

Lynnae: I write a lot about frugality, so I’ve noticed my frugal tips posts have gone up in popularity. And then this morning I wrote I on learning lessons from our ancestors about dealing with economic hard times. And the first thing I noticed this morning is I’m getting a lot of positive comments on that post, and I think more than I normally would.

Vigeland: What is your advice in terms of following how our ancestors got through recession?

Lynnae: Things like, if you’re into organic vegetables you can grow your own. Learn to change your own oil on your car. A lot of people just don’t think about doing things themselves. And so that’s one thing. And simplifying and cutting back. Do we really need the cable TV? Do we really need a cell phone?

Vigeland: Jim, what about you? Have you noticed that what people are interested in is different now from what it was, say, back in September?

Jim: Yeah. What I’ve been trying to do is go back to the basics. A lot of times, you know, we enter the real world either from college or high school. And, you know, we get a bank account and we get credit cards, and we don’t entirely understand how these things work. So what I’ve been trying to do is I’ve started a foundation series where, you know, setting the personal finance foundation. I did some articles on banking: What sort of fees are involved in banking? How do you avoid them? Same thing with credit cards. And I think going back to the basics and learning the full scope of some of these products is something that is important now.

Vigeland: Steve, you’ve been talking quite a bit about this stimulus package. Do you find that your readers are, I don’t know, more interested than ever in some of the politics of what’s going on with the economy?

Steve: I think so. I mean, and I think that’s because we’re still not very far into the Obama administration. A lot of people are still projection their hopes for what they want to see fixed. It’s a big gamble. We’re basically throwing it all out on the table. We’re, you know, saying, you know, let’s see the cards now. You know, I look at somebody like myself and there were provisions in there for helping people who were on COBRA, for example, which as of yesterday I’m on COBRA. You know, there’s a lot of room actually for people to project their own hopes onto that and because of that, there’s a lot of room to write about it.

Vigeland: Well, finally, let me ask you, all three of you, the same question that I asked back in September. Which is, What is the best piece of advice that you have given recently that you could share with us? Lynnae?

Jim: My advice would be the years of prosperity that we’ve enjoyed has given, you know, everyone the opportunity to hide any financial mistakes that they’ve made. And much like what Lynnae just said, you have to take a hard look at the things that you’re doing and try to find the places where, you know, money’s leaking out where you don’t know it. Whether it’s a bank fee, or whether it’s, you know, you’re eating out too much.

Steve: I’ve mentioned it a few times on my website in passing, but really what I think is that people have to keep a positive outlook. To use the stock market as an analogy, if you buy high and sell high, you’re not going to make a lot of money. But if you can buy low and sell high, you’re going to make a lot. So, people need to keep their heads up and realize, you know, that there will be a lot of opportunities right now. And even though times are bleak, you know, these are also the times when fortunes are made and when people can really find what they really want to be doing. And this is the time to take chances. This is the time to, you know, forge ahead.

Vigeland: Steve writes at bripblap.com. Lynnae writes for beingfrugal.net. And you can find Jim at bargaineering.com. And we’ll have links to all of their websites on ours at marketplace.org. Guys, thanks so much for joining us again. It’s always nice to have you on the show and we’ll check in with you again in a few months.

Steve: Bye, Tess. Thanks for having us on the show.