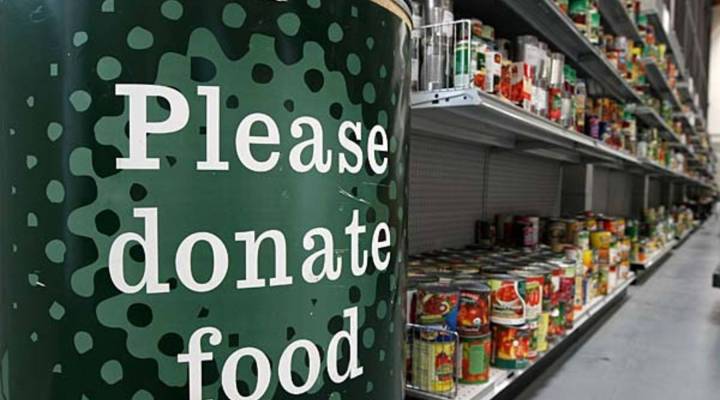 Tess Vigeland: This week many of us were busy stuffing a turkey or pounding mashed potatoes into a pulp, but not everyone was lucky enough to be feasting.

The USDA recently reported that more than 36 million Americans are “food insecure” — in other words: hungry. This spring the organization Feeding America reported that demand at food banks was up 20 percent. The face of that demand isn’t hard to find.

I met Elaine, a 41-year-old mother of two from Altadena, California, at the Foothill Unity Center. She was there with her six-month-old.

Foothill is part of the Los Angeles Regional Food Bank network. Last year, the center distributed more than two million pounds of food to low-income families. This year, the number of families in need is up 50 percent, in large part because of situations like Elaine’s.

Elaine: We really just don’t know what’s going to happen, but we’ve been in foreclosure 77 days now, so…

Elaine worked as a loan processor. Her husband was a mortgage broker. She says they cleared somewhere north of $100,000 a year and had no trouble supporting themselves and their two small children — until the housing market crashed. And now?

Elaine: We haven’t had a real estate transaction since December, so we had to take all of our E-Trade accounts, close them out. You know, we had to juggle from paying electricity, gas. It’s a humbling experience to go from making all this money and everything looks great and then all of a sudden just looking out and wondering where and when we’ll have money to buy food.

They defaulted on their home loan in January and quickly burned through about $20,000 dollars in savings, so now most expenses are going on credit cards. Her husband is pounding the pavement for a new job while she stays home with the newborn. And so here she was at Foothill for a once-a-month supply of basic foodstuffs.

Ray: This is our USDA can pack.

Ray: Yeah, and they get two bags of cans. These are our dry packs.

From there he retrieved dairy items from an industrial-sized fridge — whole milk and two quarts of buttermilk — plus strawberries, oranges, bread and two plastic grocery bags’ worth of fresh vegetables.

With her cart filled, I asked Elaine whether it was going to last her a full month.

Elaine: Not really, but a lot of like the canned goods and stuff like that, but definitely the vegetables. You learn to make soups. It’s funny because I called my mom who lives in Houston and she was like, giving me different things to do, “Freeze this and do that,” she goes “This is how it was back in the day, you know? When things got rough, that’s what you did.” I was like, “Great”, so that’s what I did. I made vegetable soup, some pasta, put some things in the freezer so that way that extended…

She also has the option of coming back weekly for more fresh produce, but it’s been an adjustment.

Elaine: And it’s crazy to go from normally going to Trader Joe’s and Whole Foods and buying the organic to where it doesn’t matter. Canned foods? Seriously? Never used them. Now if I didn’t have canned foods, I don’t know what I would do.

Vigeland: Did you ever think that you would find yourself at a food bank?

Elaine: No, never. I worked in non-profit for a few years and I worked on skid row giving vouchers and helping people. Never.

Barbara Case: We’re seeing probably an increase of 30 families a week, new, coming into our offices.

Barbara Case is the site manager for Foothill Unity Center. She says clients are allowed to pick up food if they meet certain income requirements. They start at the national poverty level and serve families that make up to 150 percent of that, so that means a family of four must have an income below $31,800, and the current economy is forcing more and more people under that cutoff.

Case: Because of the cost of food and the cost of gasoline, they need the gasoline so they can continue to go to work so they’re having to cut back on food. A lot of them are somewhat embarrassed to have to come and ask for help but everyone is struggling right now.

Part of Elaine’s struggle was asking for help at all.

Elaine: At first I wasn’t sure how it was gonna be. I mean, it helped, it really helped, because it’s hard to sit up there and ask, you know, for help when you’re so used to being the one that was helping other people.

And she is still helping. She signed up to volunteer at the food bank on days when she’s not using it.