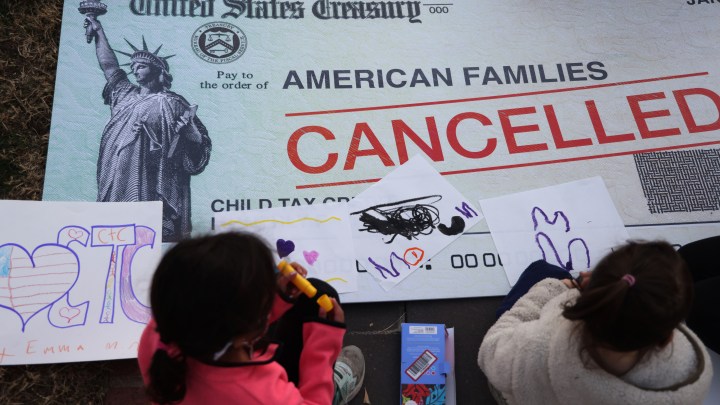 COPY
Children draw on a canceled check prop during a rally in Washington urging extension of the expanded child tax credit. Alex Wong via Getty Images

If you’re a parent, chances are that for half a year, you’ve been getting an extra few hundred dollars in your bank account every month because of the federal child tax credit.

Last spring, as part of a COVID relief package, Congress expanded the credit from a max of $2,000 a year per child to $3,600, depending on how much you make and how old your kids are.

The government also made it fully refundable, so poor families who don’t make enough money to file taxes now get the credit, and it started being sent in monthly installments instead of as a lump sum at tax time.

But all of those changes were just for this year.

On the 15th of every month, Jessica Morrison and her husband get a little over $500 from the child tax credit deposited directly into their bank account.

“It’s just been huge for us,” she said. Morrison is a caseworker for the state of Pennsylvania, and her husband drives for Uber and Lyft. They have two kids — a 2½-year-old son and a 7-year-old daughter.

Before they started getting this money every month, “there might be a last-minute expense that might pop up, and we would have had to put it on a credit card or borrow money,” Morrison said.

But recently, she said, when her husband’s car unexpectedly needed $600 worth of work, “we were just able to pay it, you know, right away. It’s just really taken a lot of stress out of the equation.”

That’s been true for families all across the country.

“It’s been hugely significant. So, just in the first month of that tax credit, that reduced food insecurity by 24%,” said Arohi Pathak with the Center for American Progress.

She said studies have shown that most parents are using the money to pay for basic expenses, like rent, utilities and clothes.

“For low-income families, this payment helps give the kind of stability on a monthly basis that, ordinarily, they wouldn’t have,” she said.

But it’s also temporary. “If Congress isn’t able to act rather quickly at this point, the payments that went out today will be the last payment people receive,” said Elaine Maag, a principal research associate at the Urban-Brookings Tax Policy Center.

She thinks a lot of families who have come to rely on the credit may not realize that. “Just like in July, many people were pleasantly surprised when they saw a payment come into their bank account. They will be equally shocked — although not happily this time — about the payment not being there.”

Extending the child tax credit as it is now would cut child poverty almost in half, Maag added.