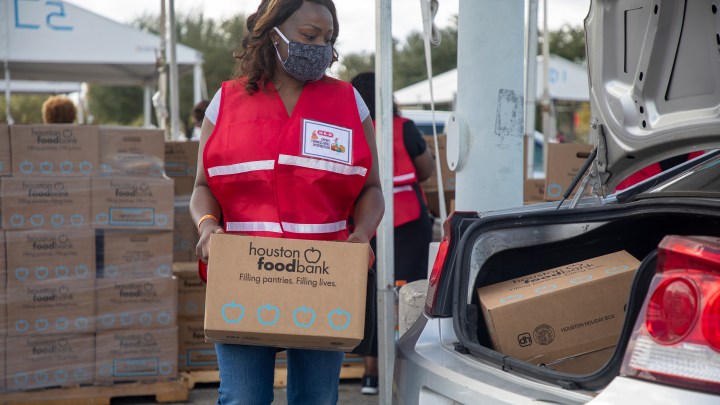 In Houston, Quinn McGee is one of thousands of people who are depending on their local food pantry to stay afloat during the COVID-19 pandemic.

On pickup days, they wake up early to get ahead of the long line of cars at a southwest Houston food pantry.

“It’s something to behold,” said McGee, who uses they/them pronouns. “You’re seeing all these cars and it’s like, ‘wow.’”

McGee started getting food there in November. They have a partner and a 9-year-old son. McGee said the family has had gaps in paychecks due to unemployment and mental health leave and they’ve struggled to catch up with bills.

“I can rest easy just a little bit,” McGee said. They said they especially appreciate the fresh fruits and vegetables — a healthy alternative to canned goods that can be high in sodium.

Since COVID-19 struck, the rate of food insecurity has more than doubled in Texas, according to a report by Feeding Texas, an association of the state’s food banks. But in the new year, it’s likely that fewer fresh foods will make it into grocery bags like McGee’s thanks to a nearly $2 million cut to a statewide grant program.

“That translates to a 19 million pound loss of produce,” said Celia Cole, CEO of Feeding Texas. “That’s produce we will not be able to get, it’s produce that will likely go to waste, and it’s produce that could be nourishing hungry Texans at a time of unprecedented food insecurity due to the pandemic.”

Feeding Texas estimates it has been serving around 1.8 million families each month during the pandemic. The Surplus Agricultural Products Grant program pays for leftover produce from state farmers to be shipped to food banks.

Texas Agriculture Commissioner Sid Miller said that after Gov. Greg Abbott requested some agencies trim their budgets by 5%, his department didn’t have many areas to cut.

Since slashing the program, he said he’s asked Abbott to use the state’s leftover $2 billion in CARES Act funding to pay for the grants, but said he hasn’t gotten a response.

“We could restore those surplus grants money and keep those food banks whole,” Miller said. “They’re in a real perilous situation right now.”

“[The grant program] accounts for about 10% of our total distribution, and that’s fairly consistent of the food banks in Texas,” Greene said. “It’s about a quarter of the produce that we receive.”

Greene said if you consider these cuts along with unprecedented demand and uncertainty around federal USDA funding, food banks are facing a potential food cliff.

Celia Cole of Feeding Texas said Congress’ recent federal economic relief bill should help in the long term, but local food banks still anticipate a delay in relief for the first three months of 2021, which could mean they fall short about 29 million pounds of food each month.

“Almost every single food bank is projecting a potential gap between the demand in their communities and their ability to meet that demand,” Cole said.

There’s an immediate need that the state program could help pay for now, Cole added. She said she hopes when the state legislature convenes in January, it will immediately reverse the budget cut.

“I’m cautiously optimistic. I think the responsible thing to do would be restore funding for this fiscal year,” Cole said.

The program has received bipartisan support for nearly 20 years, she said.

A version of this story aired on Houston Public Media.