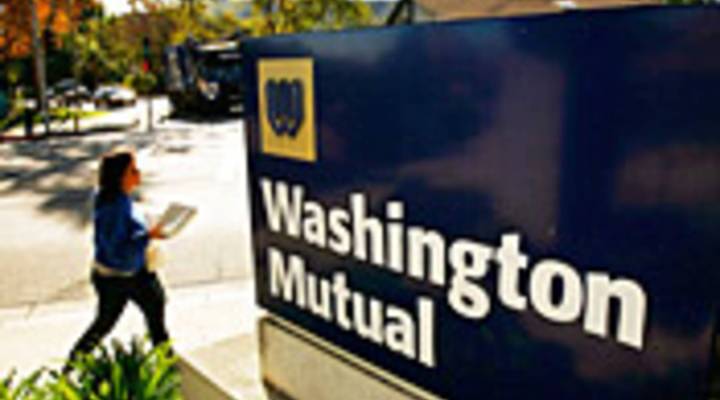 TESS VIGELAND: Wall Street paused to remember the events of this day seven years ago. At the New York Stock Exchange traders observed a moment of silence before the opening bell. The Nasdaq suspended trades between 10:29 and 10:30 a.m. Eastern time.

But for the rest of the trading day all eyes were once again on Lehman Brothers. It lost another 40 percent off its share price, finishing at $4.22. The Wall Street Journal reports the brokerage giant is in talks to sell itself — possibly to Bank of America. The Treasury Department said it was monitoring the situation.

As it has all week, Lehman took much of the banking sector down with it, most notably Washington Mutual. The nation’s largest savings and loan dipped briefly below $2 a share before settling at $2.83. It’s lost 40 percent in the last two days. Wachovia is also on the better-watch-it list.

STACEY VANEK-SMITH: Investment banks and brokerage firms aren’t the only ones up to their necks in bad mortgage assets.

WASHINGTON MUTUAL TV COMMERCIAL: The uncertainty of getting a home loan made Paul irritable. Then he went to Washington Mutual. Thanks to their flexible lending rules, Paul got a quick approval.

Maybe too quick. WaMu now says it expects to lose about $19 billion because of bad home loans.

Lawrence White is with NYU’s Stern School of Business. He says banks are in the same boat as Fannie Mae, Freddie Mac and Lehman Brothers — they own lots of mortgage-related assets, which are now practically worthless.

Lawrence White: These are major assets on the balance sheets of commercial banks, savings institutions, investment banks. . . . This has real consequences.

About a dozen banks have failed so far this year, and financial institutions have written off about $500 billion. All told, we’re in the middle of the biggest banking downturn in two decades. And investors don’t think we’ve seen the end.

The Milken Institute’s James Barth says things won’t turn around until the housing market starts to recover and investors gain confidence that the rash of write-downs is over.

James Barth: Mortgage markets have to somehow stabilize. Prices have to stop falling, and banks have to basically be in a position to raise additional capital, which is difficult to do these days.

Barth says that may be difficult as long as foreclosures continue to rise. He says the credit crunch could begin to ease next year. But in the meantime, we’re likely to see more banks descend into even deeper trouble.