Renita Jablonski: This weekend marks 10 years since a pair of Stanford grad students put their Ph.D. plans on hold to launch a new search engine company. Today Google is literally synonymous with search. But observers say the company has to do even more if it’s going stay on top for another decade. Joel Rose has more.

Joel Rose: By some estimates, Google accounts for 70 percent of all Internet searches. Among patrons at the Higher Grounds coffee shop in Philadelphia, the number might even be higher.

Rose: How often would you say you Google in a given day?

First Googler: I have no idea. Embarrassing amount, I’m sure.

Second Googler: All the time, pretty much every time I’m on the Internet. I use Google maps like it’s my job.

Third Googler: I think, it definitely changed the way everybody – the way the Internet works.

Ten years later, Google is still trying to change the way the Internet works. The company has rolled out dozens of new services, from Gmail to Google Calendar, to the company’s newest offering, a Web browser called “Chrome.”

Kevin Werbach: What Google’s doing right now that I think is really smart is they’re making a large number of small bets.

Wharton School professor Kevin Werbach says Google behaves more like a start-up than a mature company worth upwards of $140 billion.

Werbach: Google has a culture that encourages engineers to try new things, and they have a culture that pushes those out into the marketplace, even if they don’t have a business model or aren’t fully polished.

But that free-wheeling attitude also has a downside, according to Preston Gralla, contributing editor at Computer World. Take, for example, the recent crash of Google Apps. Gralla says Google has to make its services work reliably if they’re going to challenge Microsoft Office for the business software market.

Preston Gralla: At some point, you become like every other company. It’s not about promise, it’s about delivering on promises. And that’s the point Google is at right now.

But Google is not like every other company when it comes to raw computing power. The company has giant server farms all over the world. Wharton’s Kevin Werbach says that makes Google uniquely positioned to cash in on the trend toward wireless, Web-based software, also known as cloud computing.

Werbach: Google has built essentially the world’s largest distributed super-computer. Everything they do even in desktop software plugs into that kind of cloud infrastructure.

He says that’s an advantage that could keep Google on top for another 10 years. 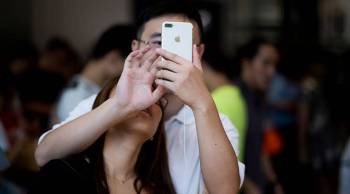