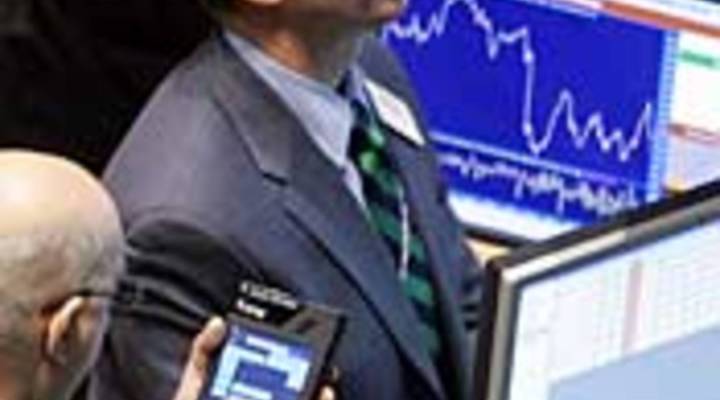 COPY
Traders work on the floor of the New York Stock Exchange after the Federal Reserve, in reaction to a severe downturn in worldwide stock markets and concern about a United States recession, reduced its interest rate today by three-quarters of a percentage point. Stephen Chernin/Getty Images

Traders work on the floor of the New York Stock Exchange after the Federal Reserve, in reaction to a severe downturn in worldwide stock markets and concern about a United States recession, reduced its interest rate today by three-quarters of a percentage point. Stephen Chernin/Getty Images
Listen Now

Tess Vigeland: Even if you’re not worried about your bank, chances are you’re worried about your investments. Whether it’s your 401(k) or college savings account, those balances aren’t looking very pretty. If you’re about to cut and run., wait ’til after you hear from our next guest.

Jason Zweig is a personal finance columnist for the Wall Street Journal and he recently participated in an experiment where he looked at some scary images and then was coached through some mental tricks to lessen the shock.

Jason, what made you subject yourself to this kind of mental punishment?

Jason Zweig: Well, what prompted me to do this is if there’s ever been a time where the stock market has scared the daylights out of people, I would think it would be the last few weeks and people are really terrified at what’s happened to their portfolios raising the question of whether there’s something you can do to control your fears and enable you to think a little more calmly, because selling is one thing but selling purely because you’re terrified is another.

Vigeland: So what is going on in our heads as we’re watching our 401(k) balances take a nosedive?

Zweig: Well, as your 401(k) implodes, what’s happening is there’s a particular structure in the brain called the amygdala which scientists have show is one of the fear centers and it kicks in with incredible speed and that can lead you to act in a way that might be against your long-term best interest.

Vigeland: It sounds like we’re talking here about the basic fight or flight mechanism, aren’t we?

Zweig: Yeah, that’s exactly what it is. This process in your brain can get you into trouble as a long-term investor, but of course it keeps us alive when we’re confronting almost any kind of natural danger, whether it’s a snake slithering across the path in front of us or a lion jumping at us — anything like that.

Vigeland: So what’s the answer then? What did you learn in terms of helping the rest of us take a chill pill instead of dumping all of our stocks?

Zweig: When something is really frightening you — as a stock market crash will — you have to say to yourself, “Use your words” and come up with a way to describe what’s happening in a scenario that’s less threatening. So one simple suggestion is instead of comparing the value of your portfolio now to where it was at its peak, instead ask yourself if the investments that I own were actually given to me as a present, would the recent decline in their prices make me want to return them or now that they’re on sale, maybe I should go and put some of my own money into them. Once you start that process, you’ll find yourself feeling calmer and more rational about it.

Vigeland: Except I have to say that it’s hard to think of it as a gift when it’s my own hard-earned money that’s already in there.

Zweig: Well, then try another strategy, Tess. Imagine that you had to advise someone you know. Think of the questions you would ask. You’d probably ask things like “Is your original rational for making this investment still valid? Other than the price, what else has changed?” There may be negative answers to those questions, but those are the right ways to think about it rather than just “The stock market is crashing; I’ve got to get out!”

Vigeland: Of course, when we’re talking about an official bear market, we’re not just talking about a small one-day downtick. A lot of people are looking at 20 percent losses.

Zweig: Yeah, that’s correct and that’s why it’s important not to try to minimize the fear and the pain
you feel. I’m not saying that you shouldn’t be afraid and I’m not saying that losing money doesn’t hurt; it does. But there’s a big difference between between feeling afraid and acting afraid. One thing I recommend: Fill the blanks in a simple sentence and it goes something like this: “Today, the Dow closed _______ and that made me feel _______” and you’ll suddenly see that you’re really letting yourself be hostage to what other people do and you’ll almost certainly be sorry later.

Vigeland: Alright, well Jason, I guess we’ll see if people follow this particular prescription and I think from now on I’m going to be referring to you as Dr. Zweig. Thanks so much.

Zweig: Well, thanks Dr. Vigeland. Great to be with you.

Vigeland: Jason Zweig’s is a personal finance columnist for the Wall Street Journal and the author most recently of “Your Money and Your Brain.”

Vigeland: And an update on an story we aired earlier this year about all those hidden fees in your 401(k) program. This week, the Labor Department proposed some new rules that would make it way easier to figure out just what those fees are costing you. You have until September 8 to let ’em know what you think.