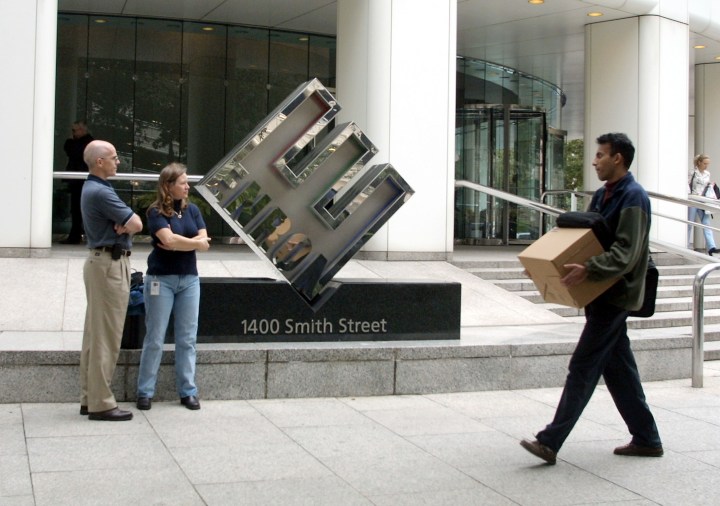 Enron employees leave the company's Houston headquarters after being laid off in 2001. James Nielsen/Getty Images
"Enron: The Smartest Guys in the Room"

Enron employees leave the company's Houston headquarters after being laid off in 2001. James Nielsen/Getty Images

We’re watching one documentary a month on economic themes for our Econ Extra Credit “Documentary Studies” project, and this month it’s “Enron: The Smartest Guys in the Room” — the story of the accounting scandal that exploded into the public eye 20 years ago.

One of the many takeaways from the Enron scandal has to do with personal finances and how investing all of your money in your own company’s stock might not be the wisest move. Marketplace’s David Brancaccio sat down with Jason Zweig, who writes “The Intelligent Investor” column for The Wall Street Journal, to discuss some of the lessons learned. Below is an edited transcript of their conversation.

David Brancaccio: I suppose it’s nice to have some skin in the game with your own company, hold their stock if it’s a publicly traded company — so that if your company’s doing great because of all your hard work, you get a little piece of it in your portfolio. I mean, that’s not irrational.

Jason Zweig: No, it’s not. People want to feel that they are part of the company they work at. If the company does well, you do well — who could resist that kind of proposition? I think the danger is that we all have heard stories about the earliest employees at Google or Microsoft or any number of other companies, who made millions or, in some cases, tens or hundreds of millions of dollars, by investing in their own company’s stock. We don’t hear the stories of people who did the same thing at companies that went bust. And that’s one of the great virtues of the Enron story: it reminds us that most companies over time don’t perform as well as the market as a whole, because stocks overall are driven by the handful of companies that outperform. And to get the full return of the stock market, you have to invest in all the stocks available, not just your own.

Brancaccio: In the documentary we’re watching this month about the collapse of Enron, there’s a guy in the film who fixes electricity lines in the Pacific Northwest. He’s minding his own business and he finds that his company gets bought by Enron, and notices that his retirement suddenly has all this Enron stock — which, in the fullness of time, evaporates. So, no fault of his own, in a sense, unless he’d been extremely proactive in “Wait, I have to diversify.” And that is a trap we can fall into.

Zweig: Totally. And I think it’s really important for people to realize that only a handful of people at Enron really understood that the company was doing fraudulent things. And on the 10th anniversary of Enron’s failure, I interviewed somebody who was among the top 50 executives at the entire company who woke up and went to work and found that the office building was locked because Enron, where he had spent more than a decade working and rising through the ranks, had gone bust. And in that moment, he immediately understood that his entire retirement had just gone up in smoke. And this is somebody who was in the top echelons of the company’s management, but wasn’t privy to the secret of how the accounting was being manipulated. And so one of the most senior people at the company had no inkling that it was about to go broke.

Brancaccio: And so you lose your job, and you lose a big chunk of what you were hoping to retire on.

Zweig: He had a multi-million dollar 401k. He had millions of dollars in company stock. He and his family had thought of themselves as wealthy. And overnight, without a minute’s worth of warning, he had nothing. And so one of the things you have to take away from this, as an individual investor, is if powerful insiders at the top of what, with hindsight, looks like an obvious fraud had no idea that the company was about to go bust, you might want to take your own familiarity with your company, and view it in a different light — because maybe you don’t know as much about your company as you think, and maybe you need to protect yourself against the risk that something might go wrong there, too. And the reason to diversify is to insure yourself against the risk that there’s something important you don’t know.

Brancaccio: I was just looking at the rules: For the old-style pensions, where the company agrees to pay you certain amounts when you retire, defined benefit, there are rules about just how much company stock can be in those portfolios. But if you’re just in a 401k, or 403b, I guess you decide what the limit is. You could put 100% into your company’s stock.

Zweig: I mean, companies have become somewhat more prudent in ramming their own stock down their employees throats. There used to be all kinds of incentives. Not that long ago, you could even get discounted stock, in some cases. But there’s been so much negative publicity — largely driven by Enron and some of the other high-profile companies that went bust around the same time, like WorldCom, that companies have pulled back from that. And it’s unusual to see 401ks where a lot of employees have all their retirement money in their own company’s stock. But it’s not something that Congress has sought to prohibit. So in theory, yes, you can put all your money in your own company stock. It is definitely not something that I would advise people to do, but there are people who try it.

Brancaccio: I just want to be sure people are hearing what Jason Zweig at The Wall Street Journal who writes about this stuff is saying: Don’t do that. Think about diversification, not just for the Enron reason, but for all sorts of reasons.

Zweig: Yeah. Within a year of when Enron went broke, I was giving a talk before a group of individual investors. And I told a story about someone I had interviewed who had lost everything by investing in Enron. And I said to the audience: “This is the reason it’s so important to diversify in your 401k. Because, although the odds are low, the consequences are really severe if the company where you work turns out to be the next Enron.” And something then happened to me that’s never happened to me before, or since, which is somebody got up in the back of the room and started screaming at me. And he’s saying, “But that’s backwards, because if we diversify, then we’re guaranteed to own all the next Enrons. And I work for the safest company in America, the greatest long-term stock performer in American history, and I’m never going to diversify.” And I said, “Oh, where do you work?” And he said, “I work at General Electric.” This was in 2001, GE stock had hit an all-time record high, and over the next 20 years it ended up losing about 80% of its market value. So at the very moment when it would have been wisest for him to diversify, he was convinced that that would be the craziest thing he could possibly do. I’ve never forgotten that, because what it really shows is that when people have a conviction about something that’s close to them, it is really hard to shake. And I don’t know whatever happened to that fellow. I hope at some point he diversified, before it was too late. But what a terrible way to learn an important lesson.