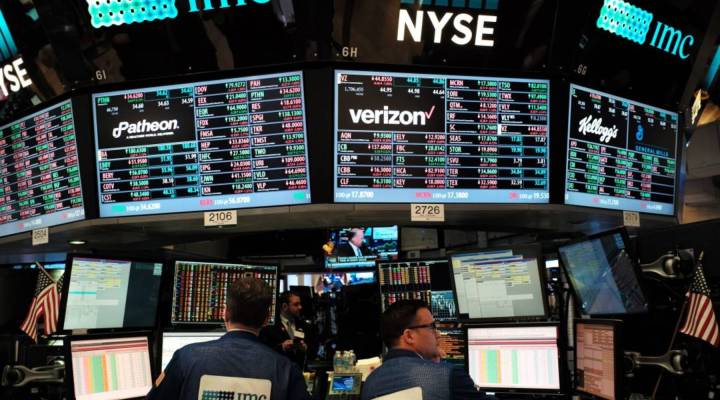 COPY
Traders work on the floor after the ringing of the opening bell to celebrate the New York Stock Exchange's 225th anniversary on May 17. JEWEL SAMAD/AFP/Getty Images

Traders work on the floor after the ringing of the opening bell to celebrate the New York Stock Exchange's 225th anniversary on May 17. JEWEL SAMAD/AFP/Getty Images
Listen Now

Personal question: what are you picky about? Romantic partners? The bands you listen to? India pale ale vs. stout vs. pilsner?

In 2017, something we are less discriminating about is stocks. Many investors have given up on the great hunt for the perfect undervalued company, and are instead opting for passive funds (e.g., funds that track an entire index).

Jason Zweig, personal finance columnist for the Wall Street Journal, joined us to talk about this shift in financial management. Below is an edited transcript.

Jason Zweig: Well, I think the basic thing that happened is that not stock picking got really cheap, and you know, it wasn’t that long ago that for an individual who wanted someone else to assemble a portfolio, that was going to cost you 1 percent of your assets every year. And now through index funds and exchange-traded funds, you can do it for like 0.03 percent.

Branaccio: Now back during the individual stock picking days, part of the charm was getting in early on a new company that you thought you had the insight to see this has more potential than the rest of the market. That’s switching, too. It’s not like the IPO rage of some years ago.

Zweig: You know, 20 years ago, there were close to 7,500 publicly traded stocks. Today we’re down to about 3,600. So half of all publicly traded companies in the United States have disappeared. The rise of so-called private equity funds or buyout funds has withdrawn a whole lot of traditionally publicly listed companies from the stock market. And without a steady supply of IPOs to replace those listings, the choices that are available to investors have really shrunk. Now it’s worth remembering that most IPOs do not perform very well. So having that opportunity taken away from you might not be that great an opportunity cost. But it’s also true that — I mean, Uber is not the best example, but maybe a company like Airbnb or there’s any number of others we could name.

Zweig: Yep, exactly. So those gains, as those companies grow and become more profitable, aren’t being shared yet with the general public.

Brancaccio: Now companies like TD Ameritrade and Scottrade, they merged but they will say that somebody still likes to pick their individual stocks. It’s not dead.

Zweig: No, it’s not dead. I think what many individual investors are doing is they’re putting the bulk of their assets in index funds or exchange-traded funds, and then they are taking a little bit of play money and they’re putting that into a handful of stocks. Maybe Apple, Netflix — that’s not terrible as long as they understand that they’re taking a lot of risk with that small share of their money.