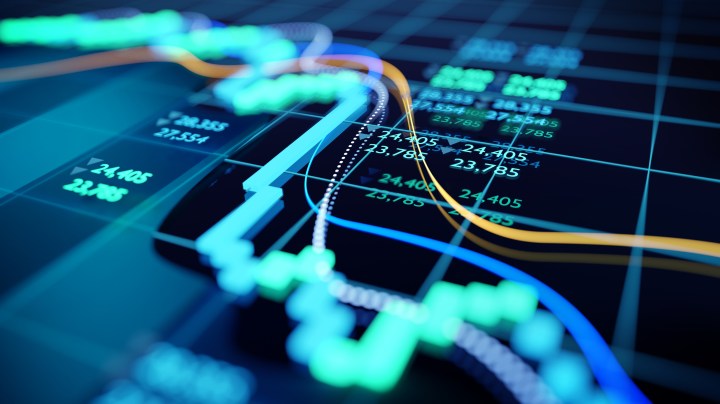 COPY
There are some things to consider for investors during market periods that are especially turbulent. solarseven / Getty Images

There are some things to consider for investors during market periods that are especially turbulent. solarseven / Getty Images
Listen Now

The first month of 2022 has been turbulent times for the stock market. Both the S&P 500 and Nasdaq indexes are down more than 10% from recent highs, meaning they are in what is called “correction territory.” These kinds of moves can send people running to re-evaluate their investments.

But instead of panicking and pulling all of your money, take a deep breath, count to five, and think about the bigger picture before you act. For more advice, Marketplace’s Sabri Ben-Achour spoke with Jason Zweig, who writes “The Intelligent Investor” column for the Wall Street Journal. Below is an edited transcript of their conversation.

Sabri Ben-Achour: There is so much going on between the Fed raising rates, S&P is down 10% this year … what should an individual investor do?

Jason Zweig: Well, the most important thing for people to do right now is to put the market movements in perspective and also look in the mirror. If you’re the kind of person who was scared out of stocks in the first quarter of 2020, or if you were old enough to be investing in 2008-2009, and you got out of stocks, then you’re probably somebody who has a very difficult time handling the anxiety of the stock market heaving up and down. And in that case, maybe your peace of mind is more important to you, than the potential for profit. And maybe you should scale back. But other people should keep their focus on the long term. I mean, if you look at what’s happened so far this year, with the S&P down more than 9% and NASDAQ down about 14%, it’s barely a blip in the long-term performance of the U.S. stock market. So a lot of it depends on your perspective.

Ben-Achour: Earlier this year, you wrote the best investment for 2022 is discipline. What do you mean by that?

Zweig: Well, do you want to have 100 million other people making your decisions for you? Or do you want to have a plan and stick to it? I mean, for the typical investor, the best plan is to buy a very widely diversified mutual fund or ETF, and add a little money to it every month, or whenever you have some spare cash, and do nothing else for the rest of your life. If you do that, you’ll probably in the very long run come out very well. But if instead, you stay focused on the headlines, and you panic when other people are panicking, you will not only have below average returns, but you’ll have a very stressful career as an investor. And it’s discipline that can keep you from making that mistake.

Ben-Achour: Does the fact that the Fed is planning on raising rates aggressively guarantee that this is just gonna be a bad year for stocks?

Zweig: No, it doesn’t. And I think it’s for two reasons. One, the Fed has stated its intentions very clearly. But we can easily imagine scenarios in which it might not act as it intends to do. The Fed has often changed its mind sometimes on very short notice, when conditions in the economy change drastically. The second thing is stocks do tend on average to go up over time. And they also have tended on average to go up when interest rates are rising at least moderately. I think it’s not a foregone conclusion that if the Fed raises rates, the stock market will have a terrible year. It could have a mediocre year.