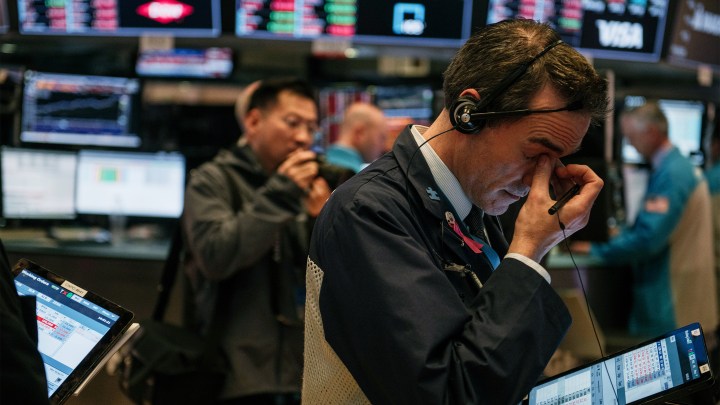 Stocks continued to slide Thursday; at one point the S&P 500, the Dow and the NASDAQ all fell into what’s known as “correction” territory. That means they fell more than 10% from their highs just two and a half weeks ago.

Technically, there is no official definition of a correction, but most people will tell you it’s a fall of 10% or more from a high.

“A correction basically can arise literally out of the blue,” said John Bollinger, president of Bollinger Capital Management, adding that some corrections can be predicted.

“For example, in this correction, there was a lot of fear building up about the coronavirus,” Bollinger said.

That we call them “corrections” suggests that something needed to be corrected — sometimes it did. Jim Paulsen, chief investment strategist at the Leuthold Group, said excessive optimism, calm and complacency can be problems.

“It becomes too easy to make money for awhile and as a result of that, investors give up the scrutiny of fundamentals and they buy something because it’s simply going up and they don’t want to miss out,” Paulsen said.

Corrections can clear out that kind of buzzed buying and make people pay closer attention to the underlying health of companies. It can also shake things up. For example, if everyone has piled on to a few tech stocks, it can shake some investors off and a different group of stocks can become the popular ones. As for what to do when one comes along? Andrew Karolyi, professor of finance at Cornell, said to stay calm.

“Try to understand it, listen to the market experts, but not necessarily to react and not to react quickly,” Karolyi said. Maybe just wait for it to pass. Corrections do, eventually.