KAI RYSSDAL: I had some time to kill on my trip over here a couple of weeks ago. I was booked on an Emirates Airlines flight out of Kennedy Airport in New York. And I had heard the Emirates lounge at JFK is pretty nice. So I figured I’d give it a shot see if I could talk my way in. Even though I was riding all the way in the back of the plane.

Attendant: I’m so sorry sir but this is an exclusive First and Business class lounge welcoming First, Business, and Skyward’s Gold passengers. At this time I wouldn’t be able to give you lounge access.

So back downstairs I went for three hours of sitting around waiting to get on a 12-and-a-half-hour flight.

Captain: Together with my colleagues here on the flight deck I’d like to welcome you aboard Emirates flight 202 bound for Dubai.

Bound for Dubai. That’s the key thing to remember about this company. Because it wasn’t really started as an airline so much as a means to an end. Dale Griffith is in charge of Emirates ground operations worldwide. He’s been with them almost since the beginning.

Dale Griffith: The idea was not to in actual fact put together a commercial concern per say. It was in actual fact to help Dubai build for the future.

The formula was pretty simple.

It’s true. Pull up a route map on their website, you see you can’t get anywhere from anywhere on Emirates unless you go through Dubai. For that to be attractive to passengers it had to be affordable. So just like the city, the airline does everything in volume. It buys big airplanes. They’ve got 58 of those new double-decker Airbuses on order, twice as many as the next guy. And it flies those planes big distances. It’s almost 7,000 miles between here and JFK in New York, a route that Emirates flies back and forth twice a day. With planes like mine that are packed solid in the back, 10 seats across, every one of them full.

Twenty years after it started flying with two rented airplanes those economies of scale have made Emirates one of the top ten airlines in the world measured by passengers carried and miles flown. But they’ve also made it a target.

Richard Aboulafia: Unfairness is in the eye of the beholder.

Richard Aboulafia is an airline analyst with the Teal Group. There have been whispered complaints for years, never proved and consistently denied by the company, that the government of Dubai goes out of its way to make sure Emirates is successful.

Aboulafia: Unquestionably, any airline that has been created with government cash has an advantage over somebody who has to go out to the private sector. From an established airline perspective, they might not be at all happy because of course its somebody else tax dollars and indeed oil money that is making this competitor so strong.

Inside the company they see it a little differently, no surprise. Again Dale Griffith, he runs the ground side of Emirates.

It’s the old rising tide lifts all boats argument. That yeah, Emirates takes business from other airlines but it gets more people flying overall, which then helps those other airlines grow. As for full service, it’s more than just a point of pride for Emirates. Luxury is a key part of their business model.

I took a hangar tour with Iain Lachlan. He’s the Emirates Senior VP for maintenance. We walked through a couple of planes in various stages of repair. And then we checked out the new private suites in Emirates First Class.

Kai Ryssdal: Oh my god. So this is like basically cubicles in an airplane.

Ryssdal: Except they’re nicer than most office cubicles.

Lachlan: This is what’s called ultrasuede and I have a guy who goes around all day with a suitcase to clean up ink marks or things that are left.

Lachlan: He goes round and ensures we don’t have that particular problem on the mini-suites. The leather seats are full recline. We have a significant number of different massages on board, on each seat.

I did eventually get a tour of an Emirates lounge, too. Pretty nice, just as I expected.

Afterward, I asked Dale Griffith how Emirates would know when it’s big enough. He laughed a little bit and he said “You know that question’s never crossed anybody’s mind.”

It’s kind of like the city of Dubai. If you build it, they will come. 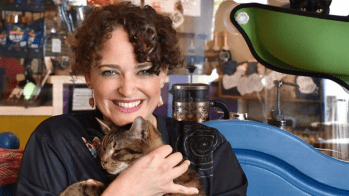