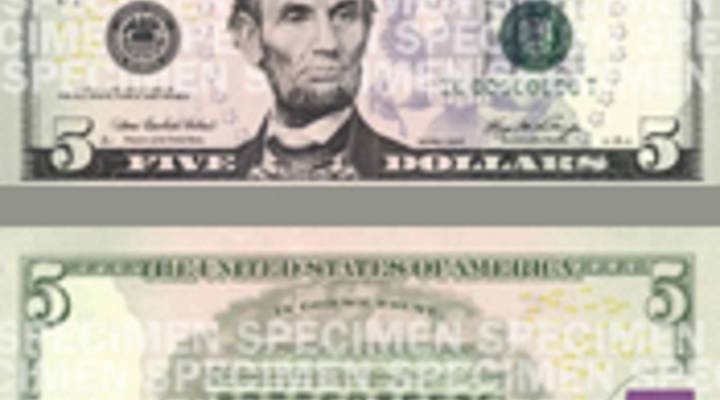 COPY
Front and back of new $5 bill to be issued March 15. Federal Reserve Bank of Minneapolis

Front and back of new $5 bill to be issued March 15. Federal Reserve Bank of Minneapolis
Listen Now

TESS VIGELAND: Twenty-nine middle school students in New Jersey escaped detention today.
The offense? They protested shorter lunch periods by paying for their snacks all in pennies. The penny’s gotten a lot of attention recently. Treasury Secretary Henry Paulson says if he had his way, he’d do away with the 1 cent all together. Now another hallmark of U.S. currency is under the microscope. A new $5 bill makes its debut next week, yet another effort to crack down on funny money. Here to talk about the new Lincoln is Professor Stephen Mihm of the University of Georgia. He literally wrote the book on counterfeiters. Professor Mihm, welcome to the program.

STEPHEN MIHM: Thanks for having me.

VIGELAND: Alright, well let’s get down to brass tacks, or paper tacks I suppose.

VIGELAND: What is this new five going to look like?

MIHM: Well, it’s going to look a lot like the old five, in the sense that you’ve still got the big head of Lincoln, you know all these notes that have come out in the last decade have these really huge . . .

MIHM: Really big head, and actually, this one is even a little more prominent because, unlike the old version, this one no longer has a border keeping the head separate from the rest of the bill, so kind of Lincoln’s head kind of rises up the middle of the bill, and then when you flip it over, you actually, the most prominent thing you see, and designedly so, is a gigantic purple five on the lower right-hand corner.

VIGELAND: This sounds like the Amazing Technicolor Dream Coat.

MIHM: It is. It’s definitely one of the most colorful bills we’ve seen yet, and one of the farthest from the kind of humble look of the greenback a decade ago. This five is actually both meant to deter counterfeiters and to help people who have visual impairments.

VIGELAND: So, once a new bill is in circulation, how long does it generally take for counterfeiters to catch up?

MIHM: Very quickly, and I think that’s a testament to a lot of the availability of digital technologies, and increasingly, counterfeiting is becoming a very high-tech profession, whether it’s practiced by criminal gangs in Bulgaria, Colombian drug cartels, or if the evidence can be believed, North Korea, and, you know, so there are much more powerful tools at the disposal of people committing fraud than there ever were, say in the 1930s, in the 1950s.

VIGELAND: How do we, consumers, know which ones are real, when there are so many changes that come about year after year? In fact, I remember pulling out a $10 bill from my wallet, just a couple of weeks ago, looking at it and thinking “that doesn’t look right,” but it felt right, and I thought, “well they change these things all the time so I guess it’s OK.”

MIHM: That’s a really good point. I think there’s a potential danger here that we’re changing the currency so often now, that we’re not really becoming habituated to what an ordinary bill looks like, and the fact is, it’s an overlapping process, so right now you have many different versions of a $5 bill that are about to be put into circulation, or become in circulation, so this could become an issue along the way where people, as you say, kind of look at this and think, “is that right, really?”

VIGELAND: Is this a bit of a historic moment? I mean Lincoln is the one who presided over the creation of the greenback and now his face is on the most modern incarnation of that.

MIHM: That’s right. It’s, you know, the greenback first surfaced in 1861, in the middle of the Civil War, to pay for the costs of the war, and it’s kind of appropriate that we’re kind of coming around full circle. Of course this new bill’s coming out at precisely the moment when the dollar seems to be losing some of its standing in the international market and there may be a kind of closing of the circle, perhaps, where the dollar may just end up becoming another one of these currencies that countries issue, as opposed to something truly international and dominant.

VIGELAND: Stephen Mihm, thanks for all the talk of the fiber today.

MIHM: Thanks for having me.