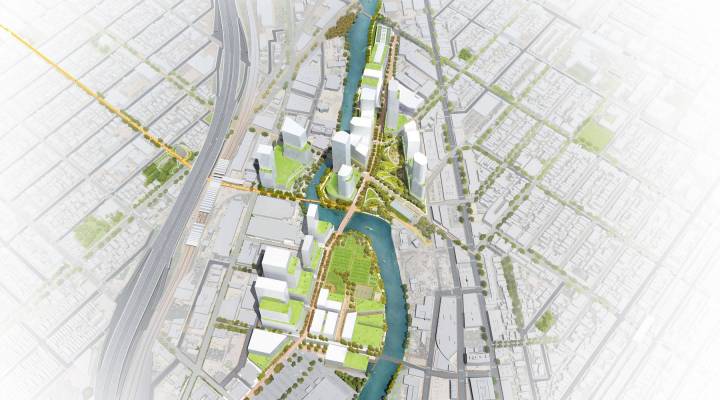 COPY
A rendering of Lincoln Yards. Courtesy of Sterling Bay

The real estate developer Sterling Bay wants to turn a 55-acre former industrial site on the Chicago River into a sprawling community with thousands of housing units, retail and commerce. Lincoln Yards is controversial project, asking for a hefty $900 million in tax subsidies. If the city approves, it could tie some conditions to the subsidy aimed at ensuring the public investment will yield benefits.

Too often, projects like this are exclusionary in terms of employment and contracting, said Calmetta Coleman of the Chicago Urban League. “All you have to do is really walk around the city and take a look at any sort of construction site and you’ll see that there’s not representation at the level that one might expect or hope for, for African Americans,” Coleman said.

“If you look at who’s exactly working at those sites and getting contracts, it’s just not in a place where there is an opportunity for the equity across all ethnic groups.”

The cost of Lincoln Yards is estimated at $6 billion dollars. To get the $900 million subsidy with Chicago City Council approval, there are requirements. Sterling Bay would have to ensure 26 percent of the contracts go to certified minority-owned businesses and 6 percent to certified women-owned businesses.

Kendra Dinkins is president and owner of Taylor Electric Company, a fourth-generation family company. Dinkins, who’s African American, says that on projects as large as Lincoln Yards, the bureaucracy can be hard for minority or women-owned contractors. “Sometimes with larger projects and more and more and people involved, and more and more layers you put on top of it, that’s more and more people who have to approve things and it takes a little bit longer,” she said.

Dinkins is on the diversity advisory council for Lincoln Yards. The Chicago Urban League is watching but not on board yet. One of the major criticisms of Lincoln Yards is that resources would be poured into a whiter, wealthier part of town that doesn’t need subsidized development. But the developer says the whole city will benefit.

“The economic and workforce opportunities that will be created by the development will reach all of Chicago, including South and West sides,” said Shelly Burke, director community engagement and diversity compliance at Sterling Bay, the firm behind the project. The company estimates 24,000 thousand permanent jobs will be created at Lincoln Yards, plus 10,000 jobs per year for 10 years during construction.

Rachel Weber, an urban planning and policy professor at the University of Illinois at Chicago, said the city’s minority contracting program has a long history of scandals around front companies. “Not actually being minority- or women-owned, but putting the name of somebody up who’s a CEO who’s maybe not really involved in the day to day activities,” Weber said.

Sterling Bay officials say they will monitor that. The city council hasn’t scheduled a vote on the subsidy yet.