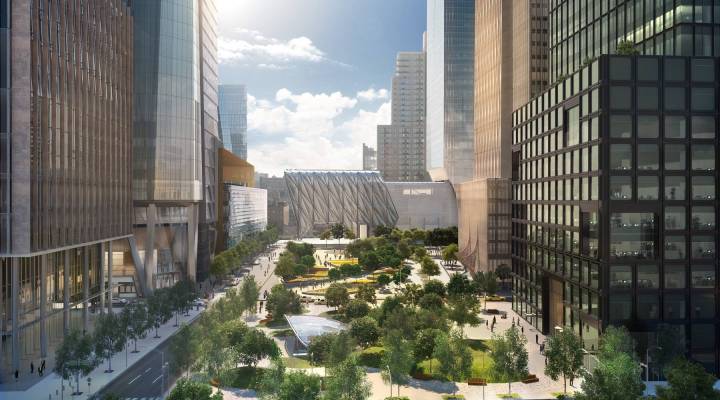 The biggest private real-estate development in American history is now unfolding in New York, in a currently little-visited area of Manhattan several avenues west of Penn Station. Called Hudson Yards, the $25 billion dollar project will include more than 17 million square feet of office, retail and residential space — more than the entire downtowns of most American cities.

But the skyscrapers, shops, parks and cultural attractions currently forming there are much more than just a massive real-estate project. The megadevelopment is an enormous bet that the way we live and work is changing forever, one that came about through the death of another big effort.

A vision of that future workplace is available on the 51st floor of 10 Hudson Yards, the office building opening soon. The floor was unfinished during a recent visit to the site with executives from Related Companies, which is developing Hudson Yards. But it’s clear from the floor-to-ceiling windows and floorplan that it’s designed for the kind of open office that tech companies love and many other industries are adopting.

Related leaders say the early sales pitches to corporations focused on the physical attributes of the buildings: technology, green construction credentials and the like. But that message only went so far.

“When we ultimately got to the CEO’s office, you can see their eyes start glazing over when you start talking about all those things,” explained Related CEO Jeff Blau. “What they really wanted to talk about is their biggest problem, which is how do they attract and retain talent.”

And what more and more CEOs believe workers want is a flexible environment where they can work how they want, with the option to work at a desk in a lofty open office, open their laptops in a park or café down below, or take a break at a nearby shop or cultural venue.

“We transitioned our whole story about Hudson Yards to really reflect the environment that we’re creating,” Blau remembered. “That’s really the pitch that has ultimately attracted people to Hudson Yards.”

That pitch has convinced a murderers’ row of big companies, including Time Warner, Wells Fargo, Coach and KKR. Hudson Yards is a titanic wager that the startup-style open office in a live/work atmosphere is the wave of the future for companies of all kinds. Manhattan’s no place to replicate the sprawling campuses favored by tech heavyweights like Google and Facebook for their West Coast homes. But Hudson Yards is perhaps the most dramatic attempt to capture some of that in a dense urban space.

“It’s a more intensive use of space on a per-person basis,” said Lynne Sagalyn, a real estate professor at Columbia Business School.

That’s the side of this reimagined work environment companies talk about less. By packing more people per floor, they spend less on real estate. (Hudson Yards buildings have increased elevator, exit star and bathroom capacities to handle the higher density.) The lavish parks, shops and cultural attractions on the ground sound great. But a key reason companies like them is because they help keep employees near the office to work longer, boosting worker productivity and corporate profit.

The New Workplace has two faces, depending on whom you ask. An open floorplan can catalyze collaboration or suffocate concentration. A “live, work, play” neighborhood can provide welcome convenience or annihilate work/life balance. This wholesale rethinking of the workplace could take us in many different directions. Wherever we’re going, Hudson Yards will likely accelerate how fast we get there.

Gazing across the busy 28 acre construction site, with giant cranes and thousands of people at work, it’s easy to forget that this massive experiment almost didn’t happen.

The Shops and Restaurants, Looking East From The Plaza.

Big New York real-estate developments tend to be long on drama. But the Hudson Yards project isn’t one of the kind of neighborhood wipeouts people associate with the Robert Moses era. Few visited this area before, because it had little more to offer than train tracks and empty sidewalks. So displacement of residents wasn’t a big issue, but there was some pretty fiery controversy about this site a few years back. Visitors won’t see any sign of it today. Feeling the heat of that battle requires standing in a certain spot on 11th Avenue and knowing what is missing. Had New York gotten the 2012 Olympics, a combination NFL/Olympic stadium/convention center there would have been the crown jewel.

Dan Doctoroff was a deputy major in the Bloomberg administration, a fierce advocate for New York getting the games. The stadium became highly controversial and was defeated, sinking the Olympic bid. When the 2012 opening ceremony happen in London instead, it was a reminder of a stinging loss for an idea he was personally and professionally passionate about. To this day he backs his vision of an Olympics that he maintains “could have been great” for New York before, during and after. But he quickly pivots to look forward.

“That’s history at this point,” Doctoroff said recently. “We took our lump. We moved on.”

So did the city. Even critics of the Olympic bid credit the momentum it created with making possible the subway extension and rezoning needed to make the Hudson Yards project possible. Doctoroff says he’s thrilled about what Hudson Yards will do for the city. It’s not just talk. He’s now CEO of Sidewalk Labs, a Google company focused on urban living. This summer, Sidewalk Labs—along with Intersection, a like-minded company that Doctoroff chairs—will move to new offices, becoming one of Hudson Yards’ first tenants.

“We’re all about applying technology to the city and really helping to usher in that technology-driven future for cities,” Doctoroff said. “There was no better place than Hudson Yards.”

Along with developers, investors and the city government, he’s betting Hudson Yards has the right vision for the future workplace. Billions in public and private money are at stake. With the unfinished buildings steadily signing up companies to occupy them, early signs are good, but it’ll be some time before it can claim lasting success. The project won’t be totally finished until the middle of next decade.

The way we work and live is changing dramatically. Hudson Yards may be the world’s biggest and priciest attempt to find out how.