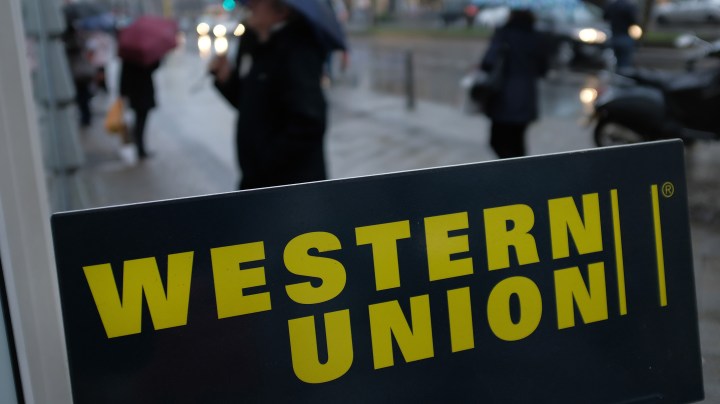 Half an hour northeast of downtown Los Angeles, Aurora Mondia sat at her dining room table with her iPad. But she wasn’t playing a game or streaming Netflix. She was taking care of some business.

“I send money to my sister in the Philippines,” she said.

Mondia is in her mid-60s and works as a cook at an assisted living home. She’s been sending money to family in the Philippines for almost 30 years. She doesn’t make alot of money but her sister is unemployed back home.

Other members of her family living in the U.S. and in Japan also help their relatives in the Philippines.

Mondia used to send her sister money through Western Union. Then somebody told her about an app called Xoom that she finds cheaper and more convenient. PayPal bought the startup in 2015.

“They tell me to select a country, so I’m going to select the Philippines now,” she said with her iPad resting on the table.

She types in the amount she wants to send. Today it’s $50. The app converts dollars into Philippine pesos as she types.

“It’s 2,500 pesos,” she said. She underscores that’s a lot of money in the Philippines.

Xoom sends the money and tacks on a fee. This time it’s $4.99. There is a sliding fee scale depending on the amount of money sent and the method. It’s cheaper if you connect your bank account as opposed to using a debit card.

Startups promising to disrupt the remittance market are popping up all over the place. According to the World Bank, the dollar amount of payments sent to low and middle-income countries reached a record high in 2018.

Technology companies know this market is healthy and growing. Facebook recently announced it would be targeting people who send money home to use a new cryptocurrency, the Libra, in the future.

For many countries, these remittances make up a sizable portion of GDP. More than 20% of El Salvador’s GDP, for instance, comes from people sending money back there from abroad.

Mexican nationals sent home more than $33 billion last year. Ninety-four percent of those dollars were from the U.S.

Gricha Raether manages the U.S. side of operations for a company called American Cash Exchange that has offices in the U.S. and in Mexico. It’s been in the remittance market for 17 years.

“Every week there’s probably one or two new e-wallet companies trying to enter the Mexican market that also have participation in the U.S., that somehow want to make that transfer of funds easier,” Raether said.

Jason Deleeuw, financial technology analyst at Piper Jaffray, said even though the remittance market is growing increasingly crowded and the competition is forcing fees down, the older, lower-tech and more expensive companies like MoneyGram and Western Union still have an advantage.

“It works and people rely on it,” he said. “And it’s worked for them, so people don’t necessarily see the need to change to a digital solution.”

Maria Alvarado falls into that camp. Standing outside a Western Union in downtown Los Angeles, she explained that she sends money to family back home in Mexico but you won’t find her doing it on an iPad.

“I’ve never tried to send money over the internet. Because I don’t know how to use the computer (for remittances),” she said.

For Alvarado, Western Union just feels safer. She trusts it, she said.

Facebook wants people to trust it in the remittance market.

It’s got one big carrot to offer: it says people will be able to use its planned cryptocurrency payment system for next to nothing.

Aurora Mondia said she might be swayed by a lower fee.

For the time being, she’s fine with paying the $4.99 to get the money to her sister. Just as long as it gets there.