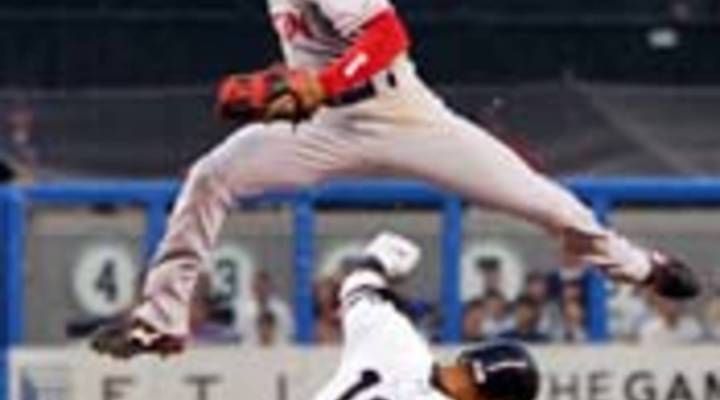 Baseball runs for a fan base in Japan

COPY
Julio Lugo of the Boston Red Sox throws to first base after forcing out Alex Rodriguez of the New York Yankees. Jim McIsaac, Getty Images

Baseball runs for a fan base in Japan

KAI RYSSDAL: The Major League Baseball season’s getting right down to it. With just two weeks left, every game counts — including the three that will be played at Fenway Park this weekend. The Yankees go to Boston five-and-a-half games behind the Red Sox. Both teams will probably wind up making the playoffs — that’s good news for fans. Great news for Major League Baseball. The Red Sox and the Yankees are two of the sport’s biggest money making machines. And that rivalry is headed overseas, as Marketplace’s Nancy Farghalli reports.

Cheery enough, but not if you’re the home team fending off an army of Red Sox followers in Boston gear. This year, those fans are attending more road games than any other teams. And in Angel Stadium in Anaheim, this 8-year-old California native pledges his allegiance to the Red Sox.

Child: My dad’s from Boston and he kind of brainwashed me.

And don’t laugh if you root for the Yankees. As a parent you have probably done the same, exact thing. Together those teams account for almost half of the merchandise sales in the Major Leagues. All those caps and T-shirts make up a multimillion-dollar brand market here. But Major League Baseball is now setting its sights beyond the U.S.

In 1999, about 80 games were shown live in Japan. Now that number tops 400 — including this recent Yankees-Red Sox game in the Bronx where two Japanese players faced each other. Dice K Matsuzaka for the Red Sox. And Hideki Matsui for the Yankees. Here’s the play-by-play.

American baseball isn’t loaded with Japanese players. More foreign players are from the Dominican Republic and Venezuela. But Japan has the second-largest economy in the world, and fans with deep pockets. J.C. Bradbury is the author of the book, “The Baseball Economist.”

J.C. Bradbury: If you have this wealthy market, hey, and you have the fan base, you can expand into these places and it means a lot of dollars.

Japan is responsible for nearly 70 percent of baseball’s foreign revenue. Jim Small runs Major League Operations there. He says it’s the most important international market. And the trick is getting Japanese fans to care as much about American baseball culture as they do about Japanese athletes in the league.

Jim Small: If you have a team you follow, there’s always a competition. There’s always a rival. So I think just the nature of sports has made it easy for a Japanese fan to look at this Yankees-Red Sox rivalry and say, “You know what, I get it.”

But people in the know say Japanese fans don’t necessarily follow U.S. teams. They follow their favorite players. Daigo Fujiwara is the founder of JapaneseBallplayers.com.

Daigo Fujiwara: Most of the media just report, you know, Matsui went 2-for-4, rather than “Yankees came back in a dramatic fashion in the ninth.”

This year, Major League Baseball ran an essay contest in Japan asking fans to pick between the Yankees and the Red Sox. Jim Small says one fan’s response sounded familiar.

Small: He said that, “I’m a Red Sox fan and not a Yankee fan because I choose good over evil.”

And Major League Baseball is hoping he’ll also choose to buy a jersey.