KAI RYSSDAL: As we mentioned, today was a bit subdued on Wall Street. Investors had last week in the backs of their minds as they waited for some key economic numbers coming out in the next few days. We’ll get durable goods data tomorrow.

Analysts and the Federal Reserve will also be watching homes sales closely Tuesday morning. With the real estate market still slumping in much of the country, realtors are getting creative in order to close the few deals they have.

Eleanor Beardsley reports they could pick up a few tips from their French counterparts who’ve developed a specialty in bringing Brits across the English Channel.

ELEANOR BEARDSLEY: Chris and Angela Payton are two of the 130,000 British citizens who now live permanently in France — a number that has doubled in the past five years.

The Paytons moved to Burgundy in 2001 after buying and restoring a stone farmhouse and barn in the tiny village of Flee.

Today they rent part of their property as a guesthouse to tourists in the summer, while enjoying their retirement dream of living in a French village all year long. They describe their experience as we sit by a roaring fire looking out on a landscape of green fields and church steeples.

CHRIS PAYTON: I love it, I love it. I lived in the country in England when I was young. And it’s just like it was 50 years ago in an English . . . tiny English farming community. Delightful set of people. We know pretty much everyone in the village. We’ve been made to feel so welcome from day one.

Whether it’s a vacation cottage or permanent home, “Les Rosbifs,” as the British are known here, because of their tendency to turn pink in the summer sun, now own an estimated $9 billion of French property and account for half of all foreign home ownership in France. A recent study by the British foreign office shows the exodus of middle class Brits to rural France is fuelled by the desire to regain the social and community values many feel Britain has lost.

In the bustling nearby town of Semur en Auxois, the three main realtors say clients like the Paytons are changing the industry. Speaking English is no longer a plus but a necessity, and because foreign buyers often rely on their realtor to introduce them to tradesmen and help them settle into their new communities, the buyer-agent relationship is often deeper and longer-lasting.

French banks are also trying to adapt to British tastes. Many have set up branches in London and offer variable and interest-only mortgages which are rarely available to French customers.

FRANCOIS DROUIN: We propose our clients service to accompany him in all the process of buying. Also we have bilingual hotline during one year for them.

Drouin says his bank also helps its clients set up an electricity account or find someone to tend their garden. Credit Foncier hopes to double its British loan portfolio by 2008.

The Paytons say they were lucky and had no problems purchasing their place. But they have come up against their share of Gallic red tape. Like when they tried to get into the state health care system.

PAYTON: Because they’re such a bureaucratic nation the French. You speak to one person it’s OK, the next person you have to find another piece of paper. And oh, you’re bedeviled by so much red tape, paperwork. It took ages and ages but once you’re in you’re in (Laughs).

And now that they are in, they say the slow pace of life in Flee — and village bingo — more than make up for the headaches of French bureaucracy. 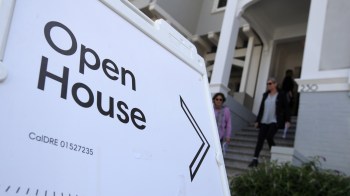