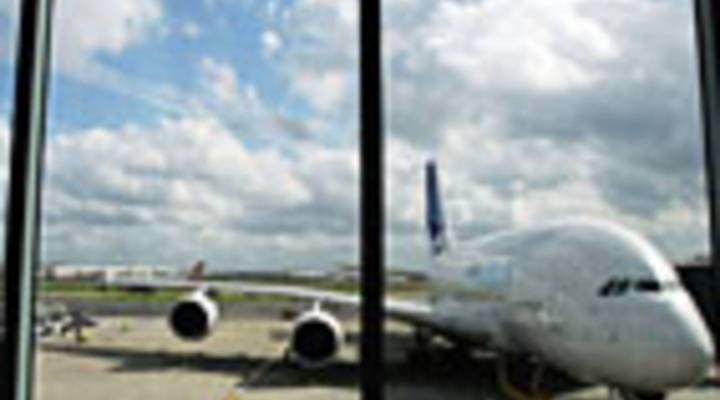 COPY
The Airbus A380, the world's largest passenger aircraft, sits near the new Terminal 3, Pier 6 after landing for the first time at Heathrow Airport in London on May 18, 2006. Scott Barbour (c) Getty Images

The Airbus A380, the world's largest passenger aircraft, sits near the new Terminal 3, Pier 6 after landing for the first time at Heathrow Airport in London on May 18, 2006. Scott Barbour (c) Getty Images
Listen Now

SCOTT JAGOW: German Chancellor Angela Merkel and French President Jacques Chirac are meeting today outside Berlin. This could be Chirac’s last presidential visit to Germany. He only has a couple months left in his term. But this meeting isn’t a diplomatic swan-song. It’s a plain and simple business showdown. And by plane, I mean, it’s about Airbus. Ethan Lindsey reports from Berlin.

ETHAN LINDSEY: See, Airbus is basically a company jointly-owned by the German and French governments. So when Airbus parent company EADS delayed a major restructuring deal on Tuesday, it was blamed on politics.

A German newspaper reported that the initial plan shut down two factories in northern Germany, eliminating close to 4,000 jobs.

German Economics Minister Michael Glos has threatened to cancel his country’s lucrative military jet orders if he faces the majority of the job cuts.

MICHAEL GLOS: We agree that measurements must be taken to regain competitiveness over rival plane makers. But Germany and France must equally share the burden in this restructuring.

By restructuring, he means job cuts. And by rival plane makers, he means U.S.-based Boeing.

Airbus says it must cut $2 billion a year to compete with Boeing and make up for the problems it’s had with its newest plane.

If no deal is reached between Merkel and Chirac, a March 9 earnings report may be the day a new restructuring plan is unveiled.