SCOTT JAGOW: Just as retailers count on the holiday season, so do movie studios. Hollywood usually makes about 20 percent of its box office. Here’s Ashley Milne-Tyte:

ASHLEY MILNE-TYTE: 2006 has been a much better year for Hollywood than 2005. Box office revenue is up six percent over the same time last year.

Paul Dergarabedian is with box office tracking firm Exhibitor Relations. He says last holiday season films like the latest Harry Potter installment and the Chronicles of Narnia gave the studios a year-end boost. This year . . .

PAUL DERGARABEDIAN: Not having a Harry Potter in the mix or the Lord of the Rings makes it a little more interesting, because there has to be a group of films that do well all together instead of just one or two films bringing up the box office.

Still, he’s betting that movies from the action-adventure Blood Diamond to action-comedies like Night at the Museum will help Hollywood end the year in a festive mood. 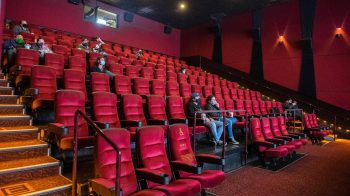 After years of watching movies at home, are audiences ready to return to theaters?