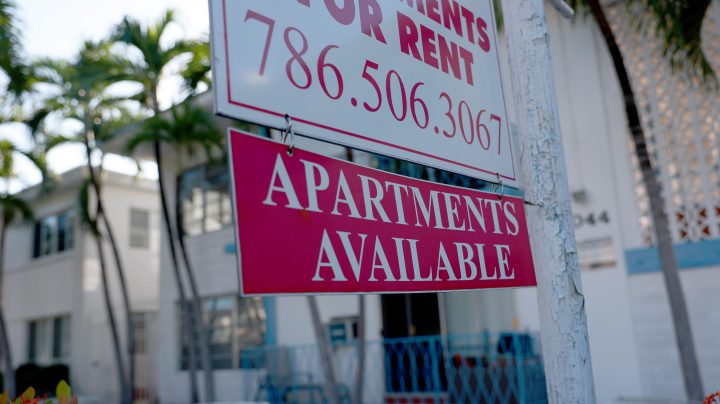 COPY
Though there are large geographic differences, the average renter household in the U.S. is spending 30% of their income on rent. Joe Raedle/Getty Images

Though there are large geographic differences, the average renter household in the U.S. is spending 30% of their income on rent. Joe Raedle/Getty Images
Listen Now

The housing affordability crisis has reached a new milestone. For the first time, the average renter household in this country is paying 30% of their income on rent, according to a new report out by Moody’s Analytics. There’s a term in housing policy circles for renters in that situation: “cost-burdened.”

When Moody’s started tracking housing affordability more than 20 years ago, the average household spent about 23% of its income on rent. A decade ago it was 26%. And at the end of last year is when that average hit 30%.

“We are in a situation where this cost of shelter — a necessity to life — has continued to rise and it is hurting households,” said Thomas LaSalvia, director of economic research at Moody’s Analytics.

There are big geographic differences, he noted. The average in New York City is more than 68% of income, and in Miami, is about 42%.

When people have to spend so much on rent, they have less to save for a down payment to buy a house, per Alexander Hermann, a researcher at Harvard’s Joint Center for Housing Studies.

“They’re also spending less on food, less on school supplies, less on health care, clothes. Really it means less leftover for all other essentials,” he said.

That’s especially true when so many of those essentials have gone up in price as well.

Those who struggle with rent also may have to settle for less-than-ideal housing, Hermann added. “A crummy apartment, a house with less space. A neighborhood with worse schools there, that’s further away from friends and family.”

There’s also been a big increase in severely cost-burdened households — those paying more than 50% of their incomes on rent.

That’s the case for Melissa, who lives in the Twin Cities. She didn’t want us to use her last name because of privacy concerns. Melissa is paying $1,065 for a bare-bones studio apartment. She makes just over $23 an hour at a trucking company and had to take a second job delivering pizzas.

“And I work somewhere between 15 to 20 hours on top of my full-time job,” she said. Even then, Melissa said she’s cut back on pretty much everything.

That’s hard on her. It’s also money she’s not spending in other parts of the economy.