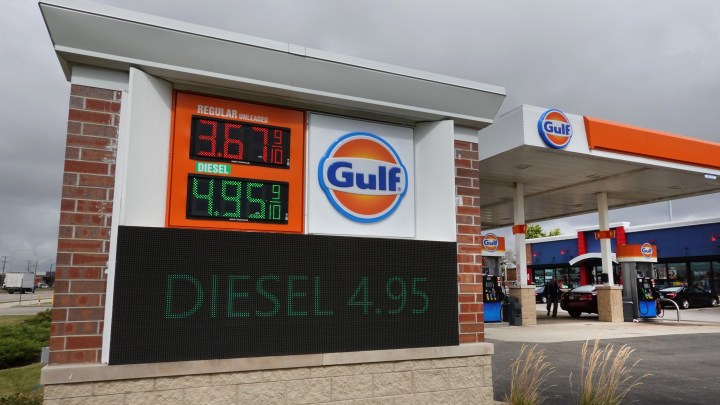 COPY
The cost of gasoline fell by more than 10.5% in August, according to the Department of Labor's consumer price index. But just about everything else was more expensive. Scott Olson/Getty Images

The cost of gasoline fell by more than 10.5% in August, according to the Department of Labor's consumer price index. But just about everything else was more expensive. Scott Olson/Getty Images
Listen Now

That’s what happened Tuesday after the Labor Department reported that the prices we pay for goods and services rose in August. The consensus was that prices would hold steady or even fall a bit.

The news convinced Wall Street that the Federal Reserve would roll out another big interest rate hike when its policymaking committee meets next week — and that really killed the vibe in the stock markets.

Now, prices on a month-to-month basis rose only one-tenth of a percentage point, or 0.1%, in August. That number would have been a lot higher if the price of gasoline hadn’t fallen by more than 10.5%. Meanwhile, just about everything else is still getting more expensive.

Take the price of medical care — up 0.7%. Hospitals and doctors offices are facing the same pressures other industries are facing, like the rising costs of labor and supplies, said Christine Eibner, a senior economist with the Rand Corp.

“Whether it’s, you know, cleaning solution or paper for the copiers, things like that, and that all tends to increase prices.”

Demand for health care services has increased this year, Eibner added, as the worst of the pandemic has subsided.

“You know, people were maybe afraid of going to the doctor or have an elective procedure done, and so they may have stayed home. But now in 2022, with the return to normalcy, people are using more medical care,” she said.

The cost of new vehicles rose 0.8% in August. Sarah House, senior economist at Wells Fargo, said the supply of vehicles hasn’t kept up with demand for 2½ years.

As a result, “there’s probably a little over 7 million missing sales,” she said. “And so whatever inventory dealers can get their hands on, they still have a good degree of pricing power for those vehicles.”

Household furnishings were more expensive in August too, even while a lot of retailers tried to get rid of excess inventory.

“Taken as a whole, this suggests that inflation continues to have quite a bit of momentum, and it’s going to make the Fed’s job pretty hard in bringing inflation down back to its 2% goal on a sustained basis,” House said.

Rent rose by 0.7% in August. That number reflects conditions nine months or a year ago, per Mark Fleming, chief economist at First American. Private-sector indicators have found that rents have been moderating.

One reason, Fleming said: The supply of apartments is improving.

“We’ve built a bunch over the last couple of years that have been sort of stuck in the supply chain morass and been unable to get delivered, so there’s a lot of delivery of multifamily units coming online now,” he said.

And that could mean rent inflation may have peaked.