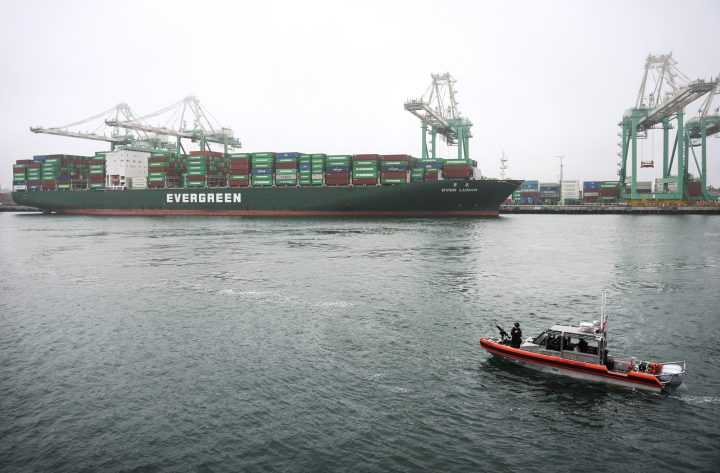 COPY
A U.S. Coast Guard vessel patrols in the Port of Los Angeles near a container ship on June 10, 2022 in Los Angeles, California. Mario Tama/Getty Images

The Energy Department has been warning of a heating oil shortage in New England. Part of the problem is that it’s difficult to get fuel into New England from other parts of the U.S. That is due in part to a lack of pipeline infrastructure, but some also blame the Jones Act, which said sea transport of cargo between U.S. ports must be performed by U.S.-owned ships.

The Jones Act, officially the Merchant Marine Act of 1920 is, fundamentally, a protectionist measure. It requires ships bringing goods between U.S. ports to have been built and owned by Americans and run with U.S. crews.

“The Jones Act protects the U.S.’ ability to have a base capacity to support maritime trade,” said Gerald Morrissey, a partner at Holland & Knight in D.C. He said the law keeps the country’s shipyards and merchant marine in business.

And, he said, they have a pretty loud voice in Washington. So, what about a temporary waiver that would allow non U.S. ships to transport more heating oil to the Northeast? Morrissey said that’s not an easy ask.

“A waiver is truly exceptional under the Jones Act.”

He said a waiver normally requires proof that the shipping restrictions would harm U.S. national defense.

Now, some say forget a temporary waiver, let’s just get rid of the Jones Act altogether. Colin Grabow at the libertarian think tank Cato Institute is one of them.

“The law is not working. So let’s scrap this and let’s do something that actually works,” he said.

He said the domestic shipping industry is too small to compete on the global stage, and when heating oil needs to be shipped to other parts of the country, there shouldn’t be restrictions to prevent that.