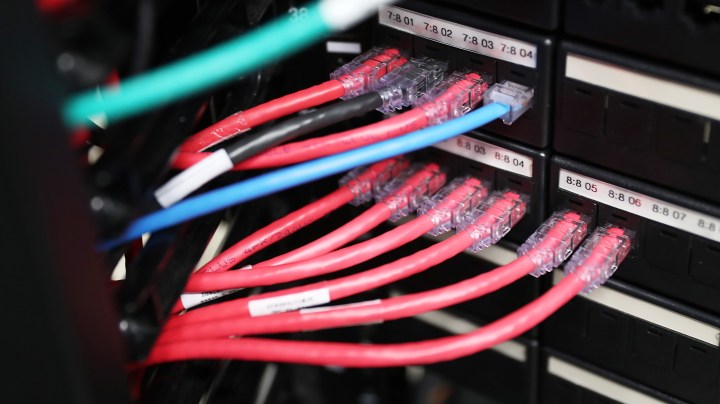 COPY
While a lot of schools, workplaces and medical clinics moved their operations online during the pandemic, many Native communities were left behind. Joe Raedle/Getty Images

While a lot of schools, workplaces and medical clinics moved their operations online during the pandemic, many Native communities were left behind. Joe Raedle/Getty Images
Listen Now

The pandemic has brought digital inequities into focus. In those early days, while some of us transitioned into remote work and school without much fuss, others were stranded. That’s particularly true on tribal lands, where in 2020, around 18% of people didn’t have a home internet connection.

A lot of federal money has gone toward the problem since then. But the watchdog Government Accountability Office said in June that the country needs a more coherent strategy on tribal broadband expansion for that money to make an impact.

The digital divide on tribal lands is persistent. Traci Morris would know — she’s been trying to figure out how to narrow it for about 15 years. She said the problem was pretty much invisible outside of Indian Country until suddenly … it wasn’t.

“2020 was a hard year. Because all of a sudden, all of the things you’ve been working on become life and death,” she said.

Schools, workplaces and medical clinics were moving their operations online, and a lot of Native people were just left behind. Morris, who’s Chickasaw and heads up the American Indian Policy Institute, said that it was a relief to see the rest of the country take note. But it was also maddening.

“Really? Y’all could have been working on this before. It’s not like this is new,” Morris said. “None of this is new.”

During the pandemic, the federal government has made billions of dollars available for broadband infrastructure on tribal lands. It’s licensed broadband spectrum to some tribal governments and helped their schools and libraries and hospitals pay their internet bills.

But there’s a missing puzzle piece, said Andrew Von Ah with the GAO: “There’s really no guiding strategy for how to leverage these different programs.”

Dozens of agencies and programs are all trying to solve the same problem without really coordinating. And there’s another issue, he said. “There’s a number of different barriers that tribes face that really discourage their participation in many of these programs.”

To start, the programs require tribal governments to apply online. And those applications — plus the permitting processes that come after — are cumbersome. Tribes need full-time employees or hired consultants to manage them.

As a result, “that funding has typically gone to some of the largest tribes,” Von Ah said, because smaller ones and those without strong economic development arms lack capacity.

These stumbling blocks point to a lack of preparation, said Matthew Rantanen, who’s Cree and works on broadband for the National Congress of American Indians.

Tribes were asking for these investments over a decade ago, before there was a crisis, he said.

“Building out broadband takes time. To react and then to build something overnight was not an option,” Rantanen said. “So we’re still building out a lot of the things that were discussed at the very beginning of the pandemic.”

Like the Tribal Broadband Connectivity Program. It set aside a billion federal dollars for broadband deployment “and roughly 300 tribes,” Rantanen said.

Around half of those that were eligible “applied for $5.8 billion for the total solution,” he added.

And nearly a year after the application window closed, the federal government is just now rolling out funding for some of those projects.

Once federal officials figure out how to get funding into the hands of tribal governments, “they will start to move the needle,” said Morris with the American Indian Policy Institute. “I think they will significantly when it finally happens, when they finally get the money out, when people finally are able to start building.”

For now, she said many tribal communities still can’t fully participate in our increasingly online world.