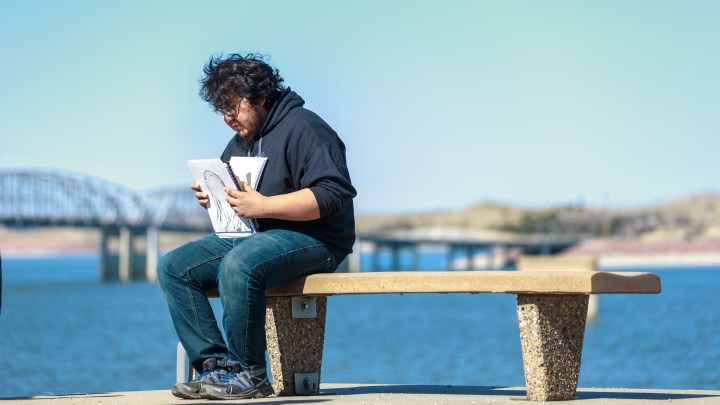 COPY
In the fall, first-time-freshman enrollment at tribal colleges fell an average of 11% nationwide. Kerem Yucel/AFP via Getty Images
COVID-19

In the fall, first-time-freshman enrollment at tribal colleges fell an average of 11% nationwide. Kerem Yucel/AFP via Getty Images
Listen Now

Twenty-two-year-old Hailley Lamebull began her second attempt at college in the fall of 2019, hoping to pursue a degree in business. Lamebull struggled after her college, located on the Fort Belknap Reservation in north-central Montana, shifted to online classes last spring.

“Online, it just wasn’t working for me. I couldn’t focus, and I started getting behind on my homework,” Lamebull recalled.

Eventually she dropped out of Aaniiih Nakoda College.

The American Indian College Fund said Lamebull is part of a larger trend. Native American community colleges serve some of the most rural and remote populations across the U.S., and with the COVID-19 pandemic forcing many of those schools online for the first time, they’ve seen big declines in student enrollment.

College fund President Cheryl Crazy Bull said most of the country’s 35 accredited tribal colleges lost students in the fall. “The area that was most concerning, of course, was the pretty significant decrease in the number of first-year students.”

“I think there was more than half of our student body didn’t have technology at home,” he said. “So, we knew if we didn’t help them with that, we wouldn’t have any students.”

So Aaniiih Nakoda provided free laptops in exchange for good grades. Chandler said without that incentive, the school’s 9% decline in student enrollment last fall could have been much worse.

Some students like Lamebull may be ready to return.

She’s “thinking of going back next semester, even if it’s still online,” Lamebull said, adding that she misses school.

She said she wants to complete her business degree to help her pursue her dream of opening a café.