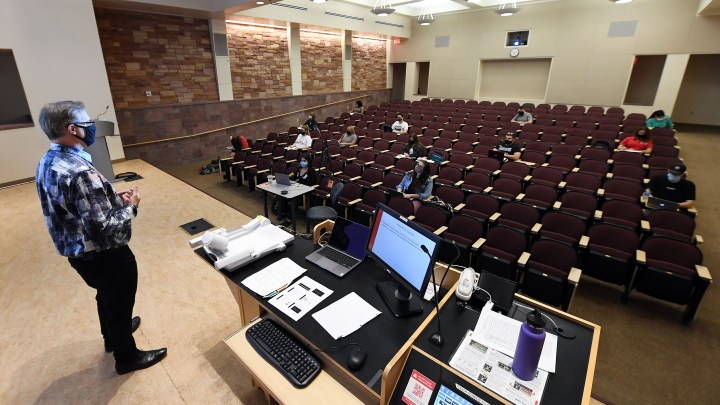 COPY
College enrollment is down just 4% compared to last year, according to the National School Clearinghouse Research Center. But the drop-off is much steeper when it comes to first-year students and those at community colleges. Ethan Miller/Getty Images
COVID-19

College enrollment is down just 4% compared to last year, according to the National School Clearinghouse Research Center. But the drop-off is much steeper when it comes to first-year students and those at community colleges. Ethan Miller/Getty Images
Listen Now

We’re about a month into the fall semester, and it’s been kind of a roller coaster with COVID. According to a survey out from lender Sallie Mae, just 7% of college students are on campus attending classes fully in person. Around half of students are being taught exclusively online. The rest are doing some hybrid combination.

And there are new college enrollment numbers out that show the return of students this fall hasn’t been evenly distributed among schools.

With the pandemic raging this summer, college administrators didn’t even know how many students would pay tuition and show up for classes —whether in person or online.

Well, now the numbers are in.

“That’s encouraging that most students who were already in college were able to stay enrolled, despite the pandemic and all the online and everything else,” he said.

But first-year enrollment is down more than 16%. And at community colleges, it’s down by nearly 25%.

“This is concerning and quite frankly surprising given the easier access you have into community college and the lower price point,” said Emily Wadhwani, who covers higher education at Fitch Ratings.

Wadhwani said the decline likely reflects job- and income-loss among low- and middle-income households. She said many community college students depend on work to pay tuition.