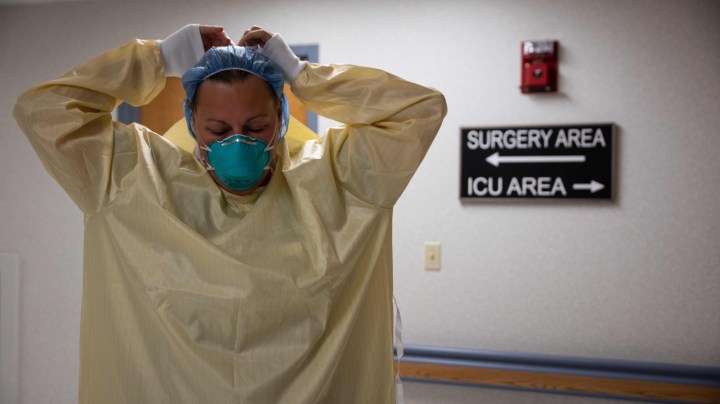 When the pandemic arrived, tribal nations weren’t exactly counting on help from the federal government.

“After all, the high rates of COVID and other health disparities in Indian Country come from decades of underfunding, right? Of a lack of investment,” said Gov. Stephen Roe Lewis of the Gila River Indian Community, based just outside Phoenix.

So when help did arrive — in the form of an initial $40 million from the 2020 CARES Act — the community invested in health care improvements: expanded intensive care unit capacity, a field hospital and a surveillance testing program at a time when COVID tests were hard to come by elsewhere.

“We had to really create our own path to protect our community and by now are moving towards nearly 1 million tests. That translates to over 5% of all tests conducted in the entire state of Arizona,” Lewis said.

Since the onset of the pandemic, more federal money has flowed into Native American communities than ever before. The CARES Act set aside $8 billion in direct aid to tribal governments. Around this time last year, they received an unprecedented $20 billion more through the American Rescue Plan. The aid has been called a potential Marshall Plan for revitalizing tribal communities, and tribal governments are using it to close infrastructure gaps.

In Menominee County in northeast Wisconsin, that means getting more tribal citizens connected to high-speed internet.

“When the pandemic hit, we found out all too well how much connectivity we were missing,” said Chairman Ron Corn Sr. of the Menominee Tribe.

Tribal employees couldn’t telework; Menominee students struggled to participate in virtual school. So, the tribe is using federal aid to connect hundreds of rural homes to fiber. Corn said this is just one long-overdue project the tribe had put off because it lacked funding.

“Having received this amount of aid, I don’t know what the words are. ‘Unprecedented’ is what comes to mind,” Corn said. “We’re more than appreciative. But it scratches the surface in regards to what our actual needs are. It’s been so long, and so many things have fallen behind.”

Things like transportation infrastructure on the rural reservation and the supply of safe, affordable housing for tribal citizens.

Those infrastructure needs are the federal government’s responsibility, according to Traci Morris, director of the American Indian Policy Institute at Arizona State University and a citizen of the Chickasaw Nation.

“We have a treaty relationship with the United States. There’s a federal trust responsibility,” Morris said.

When tribal nations ceded millions of acres of land that now make up the United States, the federal government promised to provide services like health care, housing, education and public safety in their communities.

“Make no mistake that this is not racial preference,” Morris said. Tribal nations “are a political entity. These things are due to us because we are part of the family of governments in the United States.”

But Morris said it took a pandemic that killed Native people at a higher rate than any other group in the United States for Indian Country’s infrastructure gap to be acknowledged — and for the federal government to take that trust responsibility seriously. She called pandemic-era aid the first earnest attempt to make good on it.

“So the impact of this is going to be huge in Indian Country. There’s no way it won’t be. Because we’ve never had an investment in our infrastructure,” Morris said. “It’s offensive to a lot of us that we had to die for it to get realized.”

“Our Osage day care program went to order meat for their facilities, and there was no meat available. So that was the first moment when we said, ‘We’ve got a problem,’” said Jann Hayman, director of the tribe’s natural resources department.

Another problem, she said, was that meat processors that typically serve the Osage Nation’s ranch and other ranchers in the region were backlogged.

“We had cattle and bison on the Osage Nation ranch ready to be processed, but the wait time was two years out,” Hayman said.

So, the tribe focused its aid spending on shoring up the local food supply chain. It expanded the tribe’s vegetable-growing operation and built a U.S. Department of Agriculture-certified meat processing facility.

“We’ve really tried to look at food security and food sovereignty, really, on the entire spectrum. We can build this infrastructure that we need. We can fill this gap,” Hayman said.

Tribal leaders say the federal government has never been so engaged with their needs and priorities than in the last two years. The question now is whether that engagement — and the resources that come with it — will last beyond the pandemic.