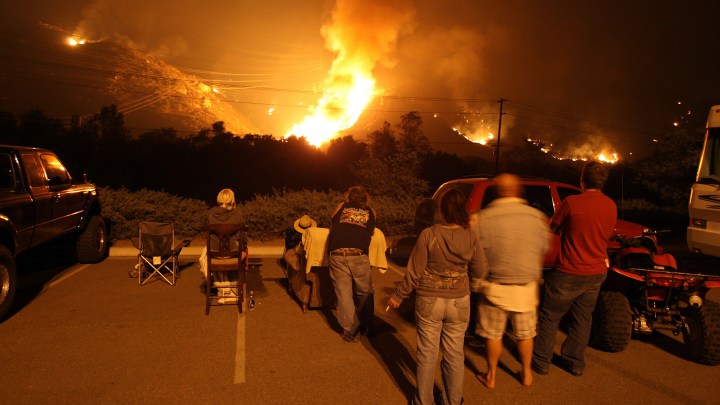 COPY
Evacuated residents watch a fire burn a hillside in California. Wildfires are a relatively new form of disaster, says Caroline Mimbs Nyce, a staff writer at The Atlantic. "There's no playbook." Robyn Beck/AFP via Getty Images
A Warmer World

“If you live in or near the wildlands, wildfires will probably happen in your area,” the National Interagency Fire Center wrote in its latest report. But as a global community, we’re behind where we need to be when it comes to planning for and effectively evacuating people who live in wildfire-prone areas.

“Marketplace” host Kimberly Adams spoke with Caroline Mimbs Nyce, a staff writer at The Atlantic, to talk about her article on wildfire evacuations and why planning and preparation are lagging around the world. The following is an edited transcript of their conversation.

Caroline Mimbs Nyce: As one researcher put it to me, wildfires only really emerged as a major disaster in the last couple of years. Researchers are able to build simulations, but we don’t historically have a ton of data, so it’s sort of both a new disaster and they’re getting worse.

Kimberly Adams: You know, because I think about the disasters where you sort of have planned evacuation routes, like for a hurricane or an earthquake or — I’m from Missouri, we had plans in places for tornadoes. Why is planning for a wildfire different?

Nyce: The problem with fire is that it can spark really anywhere and grow to be any size and, depending on the wind, move in any direction. Another thing is that when we’re talking about evacuation time, we’re actually talking about two different things. One is sort of the time it takes to alert someone; the other, second component is transit time. And again, we don’t have a ton of data, so we’re sort of playing catch-up.

Adams: That was one of the things that kind of shocked me about your piece, is that there isn’t really a lot of real-world data around evacuations and that the communities that are trying to plan for a potential wildfire evacuation have to rely on what, simulations?

Nyce: Yeah, I mean, simulations can be useful in general. And basically, they’re able to take data from previous disasters and sort of understand the worst-case scenario, best-case scenario. The real gap here is just there’s no playbook. As one expert put it to me, people dying in building fires was a real problem. So we spent a lot of time saying, you know, “If you’re gonna build a building, you really need to be able to make sure you can get all your people out, and this is how you do that.” So developing those codes and standards, I think, is really important.

Nyce: Yeah, so there was a study out of the Camp Fire, which basically burned the town of Paradise, California, and they found that people that were under 65, had a smartphone and made more than $50,000 were able to get out much faster. And it’s also important to think about this in terms of our most vulnerable populations, including people that might have disabilities, and we really do have to look at sort of the equity question when we’re talking about this stuff.

Adams: With global warming, the areas that are at high risk for wildfire seem to be areas that maybe didn’t think of themselves that way before. Has the increase in the severity and frequency and even the locations where wildfires are happening changed the way this conversation and the research around evacuations is happening?

Nyce: I don’t know that I have an exact answer for you. One interesting anecdote I heard from a source was a couple years ago, he was applying for some grants and had really wanted to study the large-scale evacuation of 100,000 people because of a wildfire. And people just laughed it off. People were like, “That’s a sci-fi scenario.” And then within a couple years, there was a fire up in Canada that caused 80,000 people to be evacuated. Uh, you know, he said, people are starting to take this field a lot more seriously. And I think it’s probably important that we do in this new sort of Fire Age.