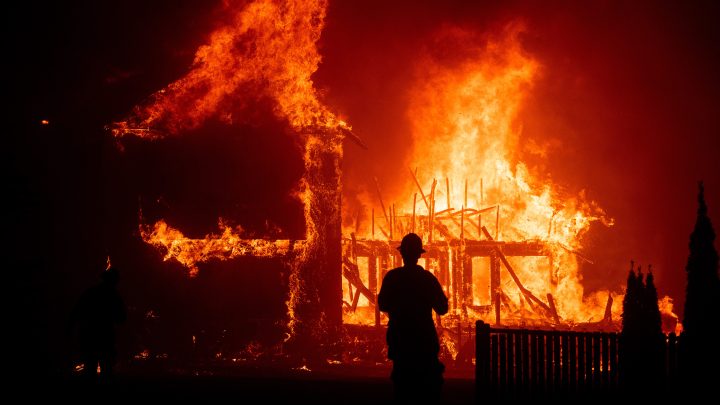 COPY
A home burns as the Camp Fire rages through Paradise, California, in November 2018. Noah Berger

In the early morning on Nov. 8, 2018, the town of Paradise, California, was ravaged by the Camp Fire — the largest wildfire in California’s history. Within hours, more than 95% of Paradise had burned down, displacing 50,000 people, 85 of whom did not survive.

As schools, shops and neighborhoods vanished, the town’s residents were left to figure out how to rebuild. Longtime Hollywood fixture Ron Howard explores this in his new documentary, “Rebuilding Paradise,” which he produced and directed. The film will be shown in select theaters, virtual screenings and drive-ins starting Friday. Howard spoke with Marketplace host Kai Ryssdal about the resilience of Paradise and its residents. The following is an edited transcript of their conversation.

Kai Ryssdal: Why’d you want to make this documentary?

Ron Howard: Well, I’ve been really enjoying delving into the documentary medium for the last few years, and I wanted to find a subject that was personal to me. And when the fire in Paradise occurred, that was a town that I knew. My mother-in law-had lived there, I’d visited in the last few years of her life, I’d visited there many times, and suddenly there was something personal going on. And I just wondered, you know, what rebuilding Paradise might actually entail, if it was even possible. And we just began.

Ryssdal: OK. So to this film, and your personal ties to Paradise. It’s a little bit brutal. The first eight minutes are the fire itself, told through, obviously, footage that you and your staff went out to get. I guess that the opening question is, what was it like for you to get up there after the fire and look around?

Howard: Well, I’d never been, you know, around anything like that, that sort of total devastation. And that in and of itself was shocking to the nervous system. And then to see and begin to interview people who, you know, had experienced the rug completely pulled out from under them, what was going to be left for them. And that became our story. And it’s also something that they wanted to talk about. They wanted to share that footage. They wanted people to understand that as we saw these individuals, make some pretty remarkable decisions and take these steps toward actually trying to rebuild their lives and this community, we would never forget that, you know, in their recent past was this harrowing experience.

Ryssdal: Yeah, the last scene in that opening 8½ minutes is a family in a car, the dad pointing out, you know, and it’s 11:30 in the morning and Paradise, there’s this fire, it’s black as night, and then the dad says, “In this car, there’s blue sky, there’s blue sky.” And you can hear, and I can’t tell whether it’s the mom or his wife or one of the kids crying and saying that they want to get as far away from Paradise as possible. And there’s a little metaphorical thing going on there, right, because so much of what’s happening now with the people of Paradise is the Paradise diaspora, right? The people who have left for economic or psychological reasons, really, and don’t want to rebuild, you know? There’s a bunch of those in this film too.

Howard: Well, it happened immediately. You could see it, I mean, we interviewed people in camps in the Red Cross area and so forth. They were fascinating, and they felt like they wanted to try to hang in and return. But you know, we were coming through there sort of every two weeks with camera crews and touching base with people, and so many people just evaporated. But you know what I found? The people who were showing up at the events, whether it was a memorial service for the town, whether it was the Christmas tree lighting or their Gold Nugget Day, which is a town parade and a celebration, those were the people who I think were doing the best, based on my observations and the people we were following.

Ryssdal: Last question, and it goes to the title of this film, “Rebuilding Paradise.” They are, right? That’s just a fact. We are rebuilding everywhere in this country that gets wiped out by natural disasters. The question is to you as the guy who made this film, has thought about this a lot and has a platform. Should we?

Howard: Oh, well, you know, I believe so. I mean, I certainly believe that there in Paradise, they need to build wisely. Look, when you pull this rug out from under people, it’s not just about their living or dying in that moment. They are no longer saving for their kids’ college fund or their business they want to build. These people, I think, offer a very inspiring case study in problem solving. I was really amazed that they accomplished what they did. I wasn’t sure that that title, “Rebuilding Paradise,” was going to be viable in the end when we first started and three and four months into the production. And they made it so through that sort of unwillingness to say no and that pulling together to make good things happen.