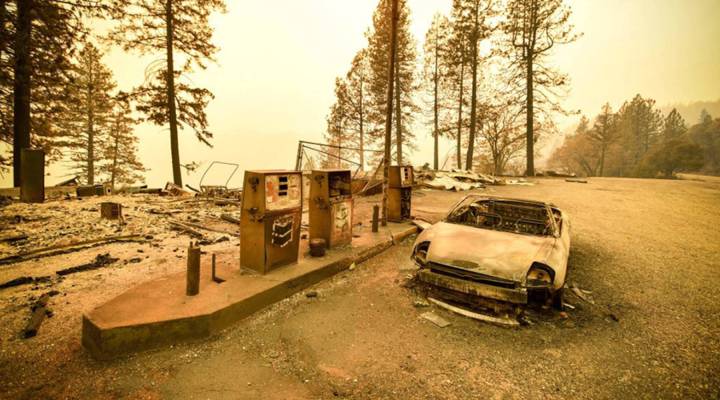 COPY
A burned car and a gas station remain visible after the Camp Fire tore through the region near Pulga, east of Paradise, California, on Nov. 11, 2018. JOSH EDELSON/AFP/Getty Images

A burned car and a gas station remain visible after the Camp Fire tore through the region near Pulga, east of Paradise, California, on Nov. 11, 2018. JOSH EDELSON/AFP/Getty Images
Listen Now

Koi pond rescue, that’s what Paradise movie theater owner Scott Lotter said has become his new activity since the fire, rescuing the fish from the burned remains of his town. The fire took his home and displaced all of his customers, but left his own fish unharmed.

“It started with my pond, where my fish survived and my house was gone,” Lotter recalled. “And my friend, he says, ‘Scott, y’know, your koi are still swimming in the pond.'”

The movie theater also survived, but before he can restart operations, he’s made temporary business arrangements, using the hotel room his daughter and her husband (and their two dogs) are staying in as a head office. And, he is spending more time collecting and feeding his neighbors’ fish. He owns one other theater, but it’s in Lake County, which was also ravaged by fire earlier this year.

“My business empire is in two of the most burned out counties in the country,” Lotter said, who is also a town councilman. “So that’s going to be a challenge for me.”

More than 2,000 businesses were located in Paradise and the surrounding communities, according to Census Department data. The majority burned, but those that haven’t will face similar challenges reopening as Lotter, raising questions for how the region will rebuild its workforce and economy.

After the fire, Lotter paid his employees for one final week, and then laid them off. Workers who lost their jobs due to disaster can apply for expedited unemployment benefits. He told them to file for unemployment benefits and federal disaster assistance payments, which can range from $40 to $450 per week. Federal, state and local agencies and nonprofits also offer a range of aid to disaster-affected individuals, including housing assistance and cash grants. But businesses have fewer avenues to pursue for aid.

“There’s really not a blueprint for pretty much the entire business community being decimated,” said Monica Nolan, the head of Paradise’s Chamber of Commerce, which also burned down in the fire.

Business insurance often will pay for loss of income, but smaller companies may lack those safety nets.

At well over six feet tall, Darrel Armstrong towers above the other barbers, all women, who work at Eye Kandy Barbershop in Chico, the small city about 20 minutes from Paradise. He just started, after the barbershop he had been running burned down in the fire.

Darrel Armstrong has begun cutting hair at Eye Kandy Barbershop in Chico, California, after the shop he ran in Paradise burned down in last month’s fire.

His grandfather had founded it almost 30 years ago. Armstrong describes a shop where regulars would have a beer and hang out while they waited for their cuts, the walls lined with personal history and mementos from his grandfather’s World War II service.

“He was in the Battle of the Bulge and so he had a lot of army stuff up and stuff like that,” Armstrong said.

Those mementos, the shop, and all of his equipment are gone. Armstrong can’t even transfer its phone number to his cell phone, because the line no longer exists. He said he did not keep a client list, because the shop did not take reservations, so he has had trouble letting his customers know how to find him.

“A lot of my customers, they are older,” Armstrong said. “They don’t do Facebook and all that stuff, so hopefully trying to get them back.”

He rented the building from the property owner and never bought business insurance.

“That’s why it’s a big deal for me to get back, get working and start it over again,” Armstrong said.

The women who run Eye Kandy offered him space and equipment, as part of an ad hoc aid effort. They are also collecting supplies — clippers, shears, and combs — to distribute to other displaced barbers. It’s a small example of a larger effort, formal and informal, from the area’s business community to help provide relief.

Toni Van Dyke, also at Eye Kandy Barbershop, is collecting and distributing shears, clippers and other equipment for barbers displaced by the fire.

“We know people are going to be making a decision about whether to stay or go, and our goal is to make that decision stay,” said Casey Hatcher, Butte County’s economic development manager.

Hatcher says the county is still determining how to best support companies. Wells Fargo has contributed $500,000 to a local nonprofit to provide small business grants, and Chico businesses are offering office space, but so far only about 20 companies have accepted, according to the local chambers of commerce.

The main source of aid companies can tap, other than insurance, is loans from the U.S. Small Business Administration.

“We’re here to help these businesses keep functioning, because that will bring the economy back to Butte County,” said Chelsea Irvine, a spokesperson for the agency. “There will be partners that offer a little bit of grant assistance here or a little bit of assistance with your marketing plan there, but we’re meant to take the bulk of that stuff.”

Since the Carr Fire this summer in Redding, the SBA has paid out $35 million in loans for a fire that damaged a tenth as many structures as this latest disaster.

The loans come with low interest rates, 3.74 percent for businesses and 2.75 percent for nonprofits. Nevertheless, that’s added debt for small businesses who may already struggle with tight margins.

Armstrong is leery of the debt, as he weighs whether to attempt to rebuild in Paradise.

Town officials are talking about luring new businesses to Paradise by rebuilding with more modern services — like higher-speed internet lines and a sewer system. But it’s unclear how many of the town’s displaced businesses can survive long enough in the interim to return to that new Paradise.

Lotter, the town councilman and theater owner is optimistic.