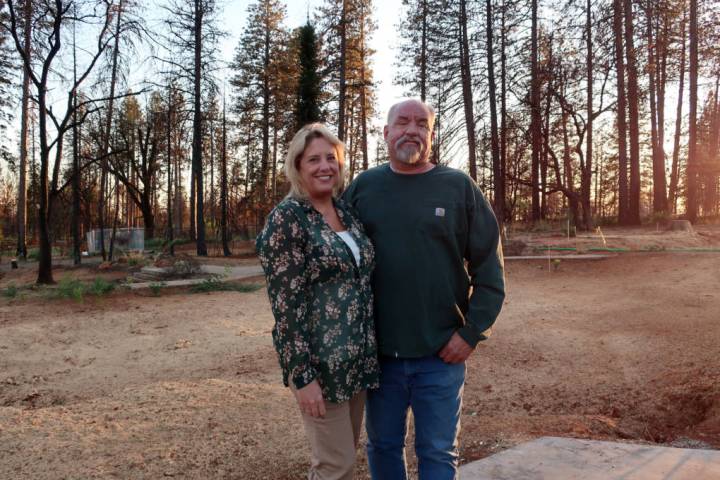 COPY
Locals Dave and Christine Williams are developing two lots in Paradise that were destroyed in the Camp Fire. Michelle Wiley/KQED

Locals Dave and Christine Williams are developing two lots in Paradise that were destroyed in the Camp Fire. Michelle Wiley/KQED
Listen Now

The town of Paradise is still trying to recover from the deadly and destructive Camp Fire that broke out in Butte County in November 2018. The wildfire ultimately killed 85 people and destroyed more than 13,000 homes in Paradise and surrounding areas.

In the days and weeks after the fire, residents were worried that big developers would swoop in, buy up the land at a discount, and rebuild Paradise in a way that would alter the existing community.

According to a KQED analysis of property sales and building permits, roughly 30% of the properties sold after the Camp Fire went for less than their assessed value. But, according to the same analysis, most sales didn’t actually go to out of town investors.

Driving around Paradise, you still see lots of vacant lots. There’s a lot of rebuilding to do, but Dave and Christine Williams, residents of Butte County for most of their lives, have faith the town will come back.

“My grandfather’s very first born of my family in his county. His first name was Butte and he was born in 1888. My father’s middle name was Butte, and I’m not a Butte,” Dave Williams said.

The Williams’ home survived the fire, and their family history is driving them to help the town rebuild; they recently bought two empty lots.

“These are half-acre lots that at one time had — well, before the fire — three bedroom, two bath, single family homes,” Dave Williams said.

Of the parcels that changed hands in the town of Paradise, KQED found that 71% were bought by someone with a Butte County mailing address, like the Williams.

“We’re just hoping to encourage people to come on back,” Christine Williams said.

In Santa Rosa, things turned out differently in the aftermath of the 2017 North Bay Fires. Some big developers from the greater Bay Area and as far away as Los Angeles did buy up property there.

Owen said he thought about buying lots in Paradise but after visiting a couple of times decided it wasn’t a good investment because a lot of infrastructure was lost, including hospitals.

Developer Luigi Balsamo, who lives in nearby Chico, bought four lots in Paradise. He’s ready to start rebuilding and has confidence in the community.

“There’s a lot of group meetings and town halls and things going on here, like I say, to keep your finger on the pulse,” Balsamo said. “But I think also it’s kind of a feeling up here. I mean, I get the feeling, like, I believe in Paradise. I want to see it come back.”

Balsamo said while he does stand to profit from his purchases, he also wants to help the town stay affordable for the people who used to live there. One way he’s doing that is by using less expensive prefab homes, running at about $75,000 for a 1,500 square foot home.

Despite the difficulties facing the town, locals like Dave Williams said the financial uncertainty that comes with buying land in a burn area is worth it to him, to make sure people return to the area.

“We want to make sure this is a good place for families to be in,” Williams said. “If we can just do our little contribution. And I’m not saying we’re going to do it for free, but if we can just do it … I’ll sleep better at night knowing that we helped a little bit.”

A version of this story previously ran on KQED. KQED’s Michelle Wiley and Lisa Pickoff-White also contributed reporting to this story.