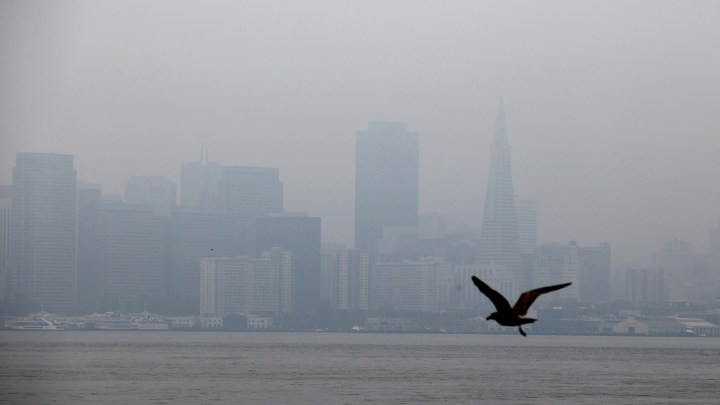 COPY
The San Francisco skyline is only partially visible through smoky conditions in September 2020. Smoke from recent wildfires have caused Nevada and other parts of California to have unhealthy and hazardous air quality. Justin Sullivan via Getty Images
A Warmer World

The San Francisco skyline is only partially visible through smoky conditions in September 2020. Smoke from recent wildfires have caused Nevada and other parts of California to have unhealthy and hazardous air quality. Justin Sullivan via Getty Images
Listen Now

The air quality in parts of Nevada and northern and central California is among the worst in the world right now because wildfire smoke. Around Lake Tahoe and elsewhere, it’s been dangerously bad for weeks now. Even the East Coast has had to deal with wildfire smoke and air quality alerts this summer.

What does all this mean for people’s health — and their health care costs?

These days, Susan Hagen checks the air quality of where she lives, near Lake Tahoe in Nevada, constantly.

“Every day you wake up, and things are just brown and there’s ash on the ground,” Hagen said. She mostly stays in. Sometimes, she even wears a mask in the house. “I’m thinking about all the toxins going into my lungs. It just terrifies me.”

Smoke from wildfires can cause bronchitis and trigger asthma attacks and heart attacks. That’s all just in the short term, said Elena Craft, senior director of climate and health at the Environmental Defense Fund.

“Over the long term, we know that particulate matter can actually cause cancer,” she said. “I’m concerned about, obviously, those long-term health implications year after year.”

With climate change making wildfires more common and severe, more and more people are winding up in emergency rooms and doctors’ offices.

“Americans are paying tens of millions of dollars each year to cope with the health problems triggered by wildfire smoke,” said Vijay Limaye at the Natural Resources Defense Council. A recent study Limaye worked on looked at smoke-related healthcare costs in two states in just one year.

“In Colorado, we ended up with about $23 million dollars in illness costs. And in Washington, about $55 million,” Limaye said. “When you factor in the economic impact of lost lives, we’re talking about nearly $4 billion in health damages.”

Those costs are poised to skyrocket, Limaye added.