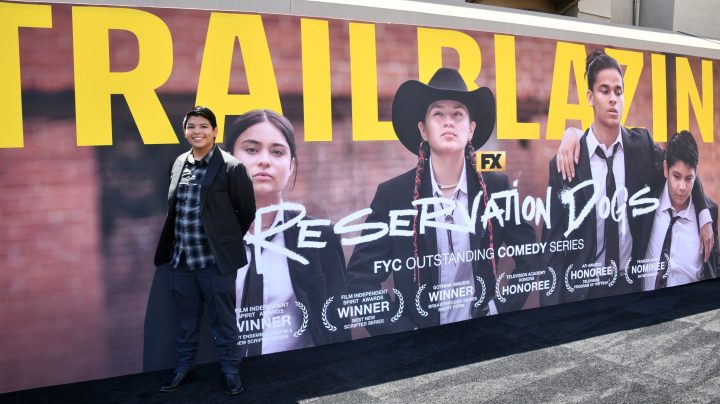 Lately if I’m cooking or washing the dishes, I’m also re-watching season two of “Rutherford Falls,” a sitcom about a young Native woman named Reagan who moves home to work for her tribe’s cultural center.

“The show is absolutely, like, choking-on-your-drink hilarious,” said Monica Braine. She’s Assiniboine and Lakota, and hopes watching a second time will boost the show’s chances of being renewed for a third season.

“I got on Facebook and I told everybody that they better get a subscription to Peacock immediately to show your support for this,” Braine said.

The show is part of a wave of new shows created for and by Indigenous people, along with AMC’s police drama “Dark Winds,” which was recently renewed, and the teenage dramedy “Reservation Dogs,” whose second season premieres tonight on Hulu. Some Native viewers, like Braine, want to show TV networks and streaming services that Native storytelling is worth investing and reinvesting in.

“I’m so bowled over by the love that we get from Indian Country, and to see so many people saying ‘Yes, we love the show, we want more of it,’” said Sierra Teller Ornelas, co-creator and showrunner of “Rutherford Falls.”

She’s worked in television for over a decade and says not too long ago, the show wouldn’t have gotten a green light.

“The assumption was there weren’t enough Native writers, there weren’t enough seasoned Native actors” or enough people interested in watching a show centering a Native community, Teller Ornelas said. “When I had the chance to make “Rutherford Falls,” we just really found that not to be true.”

Jason Asenap, a Comanche and Muscogee filmmaker and critic, said the success of these shows demonstrates that even mainstream audiences are tired of stereotypes and hungry for authentically told stories of Indigenous life.

“There’s definitely a market. It’s proven now,” Asenap said. “America has been ignoring our stories all this time, and now we have all these stories built up. I’m of the feeling that this will continue,” Asenap said.

So those who are trying to personally boost these shows’ viewership data can probably take it easy.