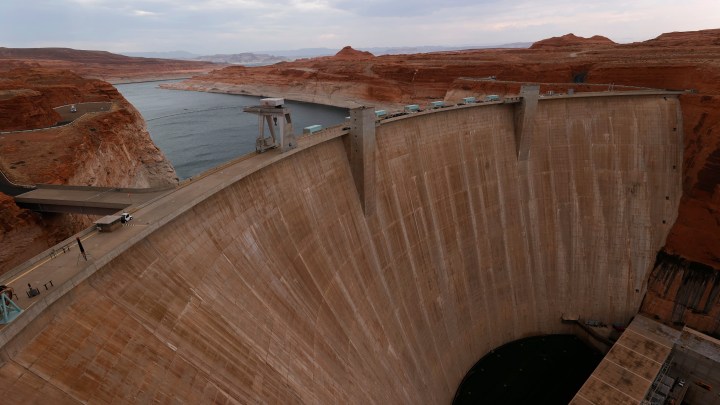 COPY
"The way that we're defining this...is not just about those water volumes, it's also about water quality, and also about access to water for the poor," Pacific Institute President Jason Morrison said about the business-led Water Resilience Coalition. Justin Sullivan/Getty Images

"The way that we're defining this...is not just about those water volumes, it's also about water quality, and also about access to water for the poor," Pacific Institute President Jason Morrison said about the business-led Water Resilience Coalition. Justin Sullivan/Getty Images
Listen Now

Water is becoming an increasingly scarce resource in many parts of the world. From California to the Horn of Africa, severe droughts exacerbated by climate change are becoming increasingly common.

The biggest users of water globally aren’t individuals or governments, but companies, according to Jason Morrison, president of the non-profit Pacific Institute think tank. As the water crisis worsens with climate change, companies may face higher risks and tougher operations.

Enter the CEO Water Mandate, a partnership formed in 2007 between the Pacific Institute, UN Global Compact, and over 200 endorsing companies. Also housed within the Mandate is the Water Resilience Coalition, a leadership group of over 25 companies boasting names like 3M, Microsoft, and Starbucks.

Morrison, who also heads up the mandate, says that these companies commit to promoting water security through a framework that “is not just about water volumes, it’s also about water quality, and also about access to water for the poor, which is a huge challenge globally.”

“Marketplace Morning Report” host David Brancaccio spoke to Morrison about the CEO Water Mandate, the Water Resilience Coalition, and the water security situation around the world.

David Brancaccio: I have a photo of my family swimming in the deep water of Lake Powell, Utah, in front of a crazy submerged rock taken last summer at this time, one year ago. I just saw a photo of the same spot one year later. Now it’s dry — dry, dry. So all this stuff is here in front of us. But it’s also around the world and you work toward water security. What does water security look like?

Jason Morrison: Well, there’s many dimensions to it. It’s not just the physical availability of water when it’s needed by people and nature, it also has the linkage to water quality, and the ability to manage against too much water. So sometimes we don’t have enough, other times, we have way more than we need and it causes a lot of damage and flooding. And in often [those] cases, it’s the same location where that happens at different times of the year or on different years.

Brancaccio: So tell me about the effort with all these companies, hundreds, many of them very large, not all of them, what are they pledging to do?

Morrison: Well, the Water Resilience Coalition launched two years ago, and it was born out of the recognition that the world is not on track to achieve our goals around water. You may recall that the UN has set 2030 goals for a range of sustainable development issues. The goal on water is SDG (Sustainable Development Goal) 6. And just last year, the UN released a report that showed that for a number of the targets underpinning SDG 6, where we need to quadruple our pace to get there. And so the water resilience coalition started as a CEO-led initiative with a common goal to accelerate progress against the global water crisis.

Brancaccio: So they’re pulling in this direction. What is the metric though, Mr. Morrison, I mean, it’s not just, “OK, my factory is going to use 800,000 gallons of water a day, I gotta find 800,000 gallons a day for the community.” It’s not just volume, right?

Morrison: That’s right, the cornerstone of the commitment made by member companies of the Water Resilience Coalition orients, around the concept of Net Positive Water Impact. And the way that we’re defining this, importantly, is not just about those water volumes, it’s also about water quality, and also about access to water for the poor, which is a huge challenge globally. And so companies are committing on time-bound, quantifiable goals on net positive water impact. And from our perspective, what’s really exciting is that the coalition has also established collective ambition on water. By 2030, we aim to have positive water impact in over 100 water-stressed basins, and specifically to enable water access, sanitation and hygiene for over 300 million people. So we have both individual goals and collective ambition that we’re working toward.

Brancaccio: Now it’s a voluntary effort, which I guess would depend on the earnestness of the companies making the pledges. And I know from my own reporting, that means you need senior leadership of these firms to buy into pledges like this.

Morrison: Absolutely, we have been managing a corporate water stewardship initiative called the CEO Water Mandate, and we launched in 2007. It’s housed within the UN Global Compact. And having CEO in the name of the initiative is really important because many of the commitments that companies make around water don’t fall in areas that are regulated through our public policy systems. Net Positive Water Impact can be both a time-bound commitment and a quantifiable commitment. And because it’s so important to be able to track progress against this commitment, we’ve spent much of our first two years as an initiative agreeing upon the core metrics that we will use to evaluate progress of individual members against their commitments, but also the impact that we’re collectively happening in the river basins that we’re working [in] together. And we can establish against a baseline and then measure what our joint efforts are doing to be able to change the conditions in those basins over time.

Brancaccio: So this report card, we’ll start seeing them maybe in coming years?

Morrison: Yes, we’re already collecting the data. Getting everyone rowing in the same direction has been a big part of our initial work. But we will be looking to release our first impact report in 2023 that will roll up a lot of the information we’re collecting and show how the coalition as a whole is having an impact in the regions where we’re working together. And we’re working together and 11 basins right now in five countries: India, South Africa, Brazil, Mexico and the United States.

Brancaccio: I mean, I know this is a sensitive question. Will you identify individual companies and their performance on this report card or is it going to be an aggregate for each of these sub-regions?

Morrison: No, actually it is individual. And that’s one of the core requirements of the CEO Water Mandate is an annual reporting commitment. And so if you go on to the CEO Water Mandate page now, there’s over 220 companies that are mandate-endorsing companies. And there’s an annual report that’s posted on the page. And you can see exactly what the company has done on water vis-à-vis, its commitments. It’s all very transparent.

It’s not just a “nice thing to do”

Brancaccio: So you’re saying some of these companies realize that it’s not just a nice thing to do to address these water issues, that the company might not be able to do its business — might not exist — if they don’t deal with the water issues?

Morrison: Absolutely. Most sustainability topics have a business case if you elongate the temporal horizon, right. And for water, most companies today are already facing water-related risk, whether it’s in their direct operations or in their supply chain, or even the markets where they’re trying to sell their products and services. And so altruism is not what’s motivating behavior. You don’t have to convince a food and beverage company like Coca-Cola, or Danone, or an agribusiness company like Cargill, that water and climate present a real risk to the business if it’s not proactively managed. And that’s why it’s not hard for us in the Water Resilience Coalition to get CEOs to make this commitment and to invest in ways that are proportional to the scope of the risks that they know they face.

Brancaccio: Now, around the world, you mentioned that this is, in a sense, a system that this coalition has had to come up with itself in the absence of often specific regulation by the governments in these regions. What about in the United States? I mean California keeps a pretty close eye on how water is used, the government?

Morrison: Yes, that’s the case. But you know, what’s happening with climate change and its impacts on water system[s] is [something] we’re only starting to get our head around. There’s the expression, that if climate change were a shark, water would be its teeth because the impact on water is where it’s felt most, both for communities and nature, but also for businesses. In California, there’s a real conversation underway about, “What does the water systems of the future look like? And what do we need to do here in this state to build more resilient water systems,” and ensured there’s going to be policies and programs that come out of the state and local government along these lines. But there’s a real sense by businesses, particularly let’s say, if you’re a business with an agricultural supply chain, that more can be done to work with your suppliers, to try to drive best practice and to really improve the resilience of your own company’s value chain, but also for the region as a whole.

Brancaccio: I mean, technology must be part of this. How do you feel about the role of technology in solving some of this? You know, desalination, taking the salt out of water [and] make it drinkable, is theoretically not all that complicated, but it’s very energy-intensive, and it can, done wrong, contribute to the very climate change that exacerbated the problem.

Morrison: Absolutely. Over the last six months, we landed on a strategic plan called our 2030 Roadmap for Collective Action. This is the eight-year plan to get us to our goal. And one of the pillars in that is technological innovation and innovations in financing. Because we think that the business community is really well-positioned, perhaps uniquely positioned, to really accelerate on both of those fronts. We believe that our members are uniquely able to bring something to the water solution and that we can help scale that through the rest of our members. We’ve also just entered into a partnership with the European Space Agency. And the nature of that partnership is about trying to use space technology, satellite data and imagery to really understand what’s going on in these basins better in real-time, so that we can manage our water systems better. And so innovation and technology is one of the cornerstones of what we’re working on within the Water Resilience Coalition.