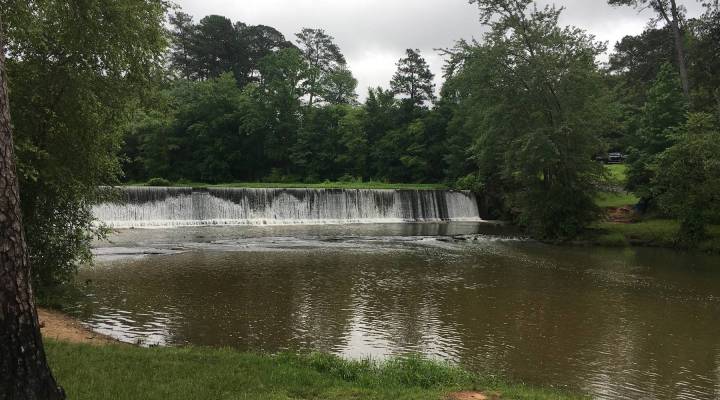 COPY
The pond at Starr’s Mill is one of the reservoirs that Fayette County operates. The water system is allowed to use water from this reservoir, but it doesn’t, choosing instead to let it flow downstream for other uses.  Molly Samuel/for Marketplace

The pond at Starr’s Mill is one of the reservoirs that Fayette County operates. The water system is allowed to use water from this reservoir, but it doesn’t, choosing instead to let it flow downstream for other uses.  Molly Samuel/for Marketplace
Listen Now

Conservation and efficiency are hot topics at water agencies these days. In metro Atlanta, water agencies encourage people to use less water by charging those who use more a higher fee. Called conservation pricing, it’s like the opposite of a bulk discount.

But the Fayette County Water System, which operates a handful of reservoirs in suburban Atlanta, is taking conservation in a new direction. Lee Pope, the director of the agency, is encouraging his own customers to use water more carefully, but he’s also sharing water: letting more of it flow downstream, out of the reservoirs.

“We’re asking, ‘Hey, what do we need to release to make sure we take care of our neighbors?’” he said.

Fayette County sits near the headwaters of a river. The water agency used to keep all the water it was entitled to, which created problems downstream.

“Those creeks have been severely strained during drought years, and under past management, those creeks have run dry,” said Ben Emanuel, with the Atlanta office of the environmental group, American Rivers.

When creeks run dry, it’s bad for the environment. And Fayette County sends water downstream to other places that need it, too.

“We still have plenty of water to meet the demands here, why do we want to be greedy?” Pope said.

The water issues in the Southeast haven’t grabbed headlines recently the way California’s water issues have, but the area has had a few major droughts.  Florida, Georgia and Alabama have been arguing about water for decades. Right now Georgia and Florida are in a water dispute that’s reached the U.S. Supreme Court.

But here in Fayette County, Pope is working with Emanuel to make sure  people, plants and animals get what they need. He said he plans to ask Georgia regulators to change the county’s water permits, setting in stone its more generous water management approach.

Emanuel and other environmentalists laid the groundwork for the change in Fayette County’s water policy change, putting together a report on issues in the river basin, and getting a group of water managers and water advocates together to talk. When Pope joined the agency, he was eager to help change the water management policy to a more generous one.

Now, Pope is working with environmental groups to pay for studies to figure out the best way to manage the water. Letting the water  flow out of the reservoirs doesn’t really cost the water agency anything, because of the way water rights work in the state.

“Fayette County’s really stepping up to be a leader in this area,” said environmental lawyer Laurie Fowler, the director of policy at the University of Georgia’s River Basin Center. “It’s really an example of sharing information and resources, looking together at the problem and figuring out what’s the best solution environmentally, most cost-effectively.”

“I think in many cases with water, we tend to fight over it, and there’s a lot of conflict related to it,” said Heather Cooley, the water program manager at the Pacific Institute, a water think tank based in California. “But there are opportunities for cooperation.”

Cooley said since water issues tend to be so local, this exact approach might not be easy to replicate in other places, but still, she hopes it could at least be a model for communities all over the country dealing with water scarcity or water quality problems.

“Even in areas that don’t yet realize they have a problem, given climate change, given continued growth, it’s very likely that they will be facing something in the future,” she said.

Pope said when he talks with other people in the industry about what he’s doing here, they do sometimes ask him why he’d release more water than he’s required to. He said his answer is because it’s the right thing to do. 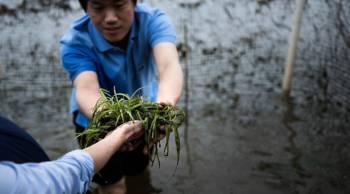 EPA poised to roll back what waterways are protected