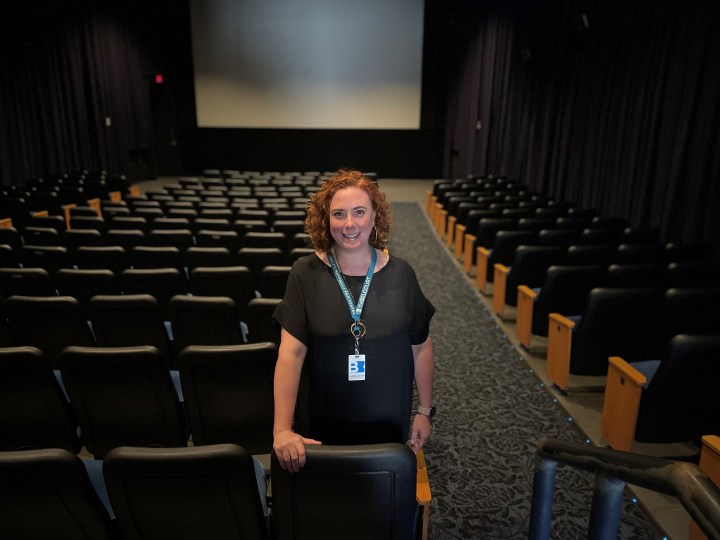 Last week, “Marketplace” host Kai Ryssdal visited Stephanie Silverman at the Belcourt Theatre in Nashville, Tennessee, nearly two years later than initially planned because of the pandemic. Silverman, executive director of the theater, is among the 10 people Marketplace is following in our series “United States of Work.”

The Belcourt was forced to shut its doors in early 2020, at a time when analysts saw bankruptcy as the best option for AMC, the world’s biggest movie theater chain, and the future of theaters was unclear. The Belcourt officially reopened in April 2021, thanks to donations and grants, as well as two Paycheck Protection Program loans and a Shuttered Venue Operators Grant from the Small Business Administration.

After two years of Zoom calls, Silverman gave Ryssdal a tour of the Belcourt’s three theaters and a projection booth. The nonprofit Belcourt shows new independent films, like “Marcel the Shell With Shoes On,” as well as classic films, like “Malcolm X” (1992) and “Willy Wonka & The Chocolate Factory” (1971), which the Belcourt was preparing to show over the weekend. The following is an edited transcript of Silverman and Ryssdal’s conversation.

Kai Ryssdal: A couple of things I wanted to touch base with: No. 1, crowds are good, right?

Stephanie Silverman: Yeah, we just had a great weekend. It looked like a normal Belcourt weekend.

Ryssdal: Is that all “Marcel?”

Silverman: It’s mostly “Marcel,” then we have this really great series right now going on called Queer Classics. We try and work in the repertory space, finding maybe the voices and the artists who have gotten less play than old white guys.

Ryssdal: Totally fair. Staff, they’re gonna start rolling in. I saw that on the front it said you guys open at 2, so we’re early, but they’re gonna roll in here. Are you staffed up? Do you need people?

Silverman: We need maybe a couple more people, but we’re pretty good right now. The big thing we’ve had to do is really significantly raise our hourly rates. Overall, since we’ve reopened, four bucks an hour, that’s the increase.

Ryssdal: That’s the increase? On what kind of base?

Silverman: Yeah, so we started at 10. And now we’re at $14 an hour starting. So we’re not even to 15, which is at least where we’d like to get, but we’re getting there faster than we thought. Which is a thing that I think the pandemic is forcing everyone to do, which is an upside.

Ryssdal: So let me ask the follow-on question, which is inflation and the cost of goods sold for you and all of that. I mean, I don’t imagine “Malcolm X’s” prints costs more, but all the wine and all the beer and all the popcorn.

Silverman: All this stuff costs more. The “Malcolm X” piece that costs more is shipping, just plain old delivery. Because those movies are heavy. I mean, they’ve always been expensive, but we really have seen an increase. There’s been a funny sort of shortage nationally of popcorn buckets, for instance. We’re on a listserv of other art houses, and people are like, “Where’s everybody getting their buckets? We’re out here!”

Ryssdal: So where are you getting your buckets?

Ryssdal: Setting aside for a second the variants and the idea that we’re done with the pandemic, but the pandemic is not done with us, do you think, businesswise, you’re on the far side of the pandemic?

Silverman: I think we’re getting there. I think for us, the feeling that people are really understanding how much audiences love seeing movies in theaters is for real. And it’s not just in our space, in the independent space, but certainly in the commercial space too. Like with the out-of-the-gate success of “Spider-Man” and “Top Gun” and “Thor,” those people aren’t waiting. They don’t want to wait. They want to see them in a theater. We’re seeing that here, too. Interestingly, for us, the pipeline has been funky, right? Like the place we are is the place where the Netflix streaming deals have happened the most. But we’ve been surviving on repertory really, until about this weekend with “Marcel,” which is theaters only. And people are coming. So those are accessible to anybody at all times.

Ryssdal: Do you worry about the rise of streaming and released direct-to-streaming features after the pandemic?

Silverman: I worried about it more [before] than I worry about it now. I think we’re going to see a correction, for two reasons. One, I think studios are understanding that the long tail for their movie happens when it starts an exhibition, when we do marketing and audience development for it. And then it finally lands streaming. But it needs the word-of-mouth energy that only exhibition spaces can give it. The other thing is that the creative community doesn’t love it either. If everything’s sort of the same, right, you can release anything anywhere, nothing is special. Nothing has delineation. So I think the other thing is that artists care about exhibition. They care about movies. They care that we care enough to sit in there with many- years-old movie like “Willy Wonka” and tune it and make sure that theater sounds great and looks great so that you have the very best experience watching it.