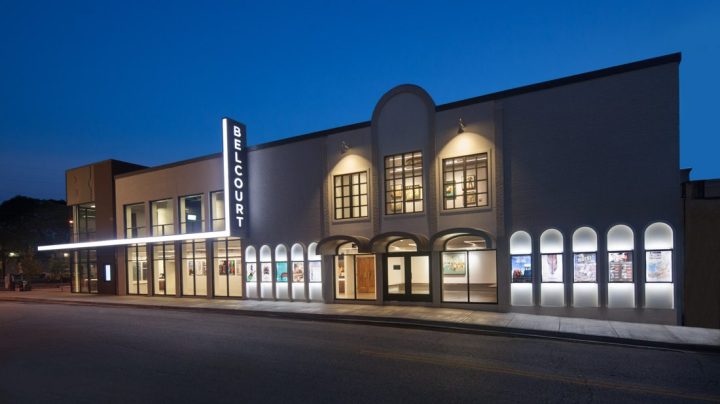 COPY
“It finally feels like we might walk into 2022 and see some consistency,” said Stephanie Silverman, executive director of the Belcourt Theatre in Nashville. Photo by Tom Gatlin, courtesy Belcourt Theatre
United States of Work

“It finally feels like we might walk into 2022 and see some consistency,” said Stephanie Silverman, executive director of the Belcourt Theatre in Nashville. Photo by Tom Gatlin, courtesy Belcourt Theatre
Listen Now

According to the latest global data on Netflix’s new top 10 tracker website, people have spent 129,110,000 hours watching “Red Notice.” But with a new slate of blockbusters and Oscar contenders opening in physical theaters only this holiday season, people are spending time in front of big screens as well.

“Marketplace” host Kai Ryssdal spoke with Stephanie Silverman, executive director of the Belcourt Theatre, a nonprofit movie house in Nashville, Tennessee, about the momentum her organization is seeing and the challenges that remain. The following is an edited transcript of their conversation.

Kai Ryssdal: How are things at the Belcourt?

Stephanie Silverman: You know, things are going OK — which I feel like is what I’ve been rating them for a little while now.

Silverman: You know, we’re seeing the numbers trend in the way we want them to, in terms of people coming back and ticket sales and films being released. Like, all of those things are lining up in a much more normal-looking way. It’s just still slower than it used to be.

Ryssdal: Talk to me about films and movies being released. Do you have enough fodder to get people in the seats?

Silverman: Yeah. You know, actually, it really is beginning to look — dare I say it — a little normal on the releasing front, at least for us. So, I don’t think we’re going to go backward from here.

Ryssdal: Well, that’s good. Are you still limiting capacity? I mean, you know, could you sell it out if you wanted to, but you’re being cautious?

Silverman: We could. We are still limiting capacity to 50%. We could sometimes sell it out, but, you know, we show films several times a day. So it’s not like in a performing arts center where they have one show a day. We can give people a little breathing room without cutting into our financials in the same way you would if you were a Broadway house, right? So we’re just kind of playing it a little safe, I’d say.

Ryssdal: Yeah. Speaking of cutting into your financials, let me ask you, [as a] small-business person, how inflation is rearing its ugly head at the Belcourt? Or is it?

Silverman: You know, it’s not too bad in terms of the film world. Yeah. But certainly, in our concessions areas, we are seeing it, you know. There are some weeks where a kind of glass that we used to always order is all of a sudden not available, we have to get something else. You know, we’re seeing prices for the regular kinds of popcorn, candy, begin to trend a little up. So it’s really in the concessions world that we feel that pinch.

Ryssdal: Are you paying people more to get them to come and work in the concessions and ticket booth and all that?

Silverman: Yeah, we have. We’ve raised our hourly rates by a couple bucks since we reopened in April. It was always a goal of ours, and in some ways this pandemic has forced all of us to begin to work toward something that’s really more appropriate and equitable and sustainable for people working hourly wages. We’re still not where we should be, and I think this is a real challenge for small businesses because our city is doing great. People are moving here, so the tax base is growing, but that means [the] cost of living is going up, housing stock is hard to find and hourly wages — at least as required by our city or our state — have not changed. I mean, they’re still at that low, low federal rate, so we just haven’t kept up as a business community, and now we’re paying the price for it. I think this is happening all over the place, honestly.

Ryssdal: Yeah, no, it is. So, just to sort of summarize, you sound reasonably optimistic. And look, I mean, my impression of you — we’ve never met face to face — but my impression of you is that you are an upbeat kind of person. But this is an optimism I’m not sure I’ve heard.

Silverman: Yeah. It finally feels like we might walk into 2022 and see some consistency that has not been present to date. October looked a little normal, and then November looked a little more normal, and December is looking pretty darn normal. So, of course, we’re nervous about the holidays, but I’m just hoping that we have enough safeguards in place that maybe we can hold a [COVID-19] spike at bay and enter 2022 with some of this momentum that we’re finally beginning to feel.