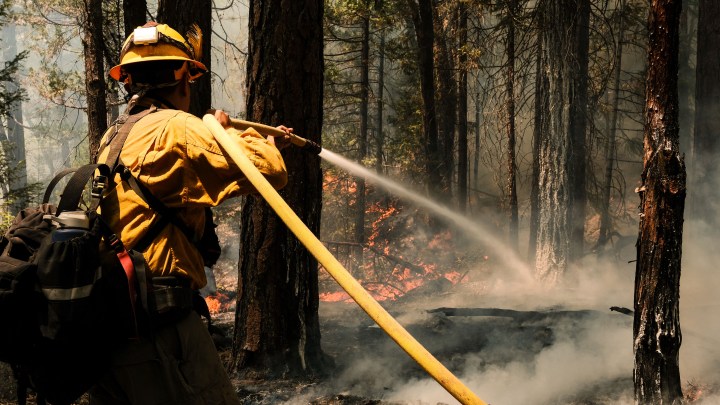 COPY
"You can pay kind of a lot to get us where we need to be on the front end of a disaster...or you could pay twice or three times as much to rebuild and recover," said Mark Ghilarducci, Director of the California Governor's Office of Emergency Services. David Odisho via Getty Images
Economic Pulse

"You can pay kind of a lot to get us where we need to be on the front end of a disaster...or you could pay twice or three times as much to rebuild and recover," said Mark Ghilarducci, Director of the California Governor's Office of Emergency Services. David Odisho via Getty Images
Listen Now

California is putting more than a billion dollars toward prevention and preparation efforts as it gears up for its annual wildfire season, which typically peaks from July through October. But California officials are up against a number of challenges.

The state is experiencing a historic drought. The National Integrated Drought Information System estimates that 99.8% of the state is in some sort of drought, while 59.8% is in “extreme drought.” These conditions make the state especially prone to wildfires, according to Mark Ghilarducci, Director of the California Governor’s Office of Emergency Services.

“It all sets up a dynamic for wildfire in these communities,” said Ghilarducci. “And it’s not something that’s anecdotal. We’ve seen 15 of the most destructive fires in the state’s history occurring, you know, since 2015, seven of those occurring in just the last two years alone.”

To make matters worse, the state is also grappling with a shortage of wildland firefighters who work on the frontlines to combat the blazes. A bill in the California Legislature is seeking to address the problem by adding more than a thousand new firefighters to the state’s Cal Fire agency. “It is harder to find individuals that really want to step up and commit to that kind of work,” said Ghilarducci.

For today’s Economic Pulse, “Marketplace Morning Report” host David Brancaccio spoke to Ghilarducci about how the state is preparing for the upcoming wildfire season and dealing with shortages on fire crews.

David Brancaccio: What you do costs money. But given the severity and frequency of wildfires in that state now, have your models to help you budget been adjusted for what you think you might be dealing with this season?

Mark Ghilarducci: We continue to learn about the threat we face, that the climate-driven events that we’re seeing in California, and of course, obviously, across the western states, and I would submit across the U.S., continue to change. But our science is much better. And with that, we’ve been able to really do a lot of work to do projections and forecasting. And along that process of being able to build in those capabilities, we’ve been able to refine our budget projections and make sure that we’re targeting funding, specifically into areas that are, you know, needed to make sure that we have the appropriate not just response to these events we’re seeing, but what’s happening before these disasters actually occur, trying to bide down the risk, trying to mitigate the risk. That’s really where we’ve been doing a lot of focus, and we’ve pivoted quite a bit of the funding into those areas as well to make our communities more resilient.

Brancaccio: So bide down the risk, it’s in part, what? Getting structures away from stuff that could catch fire?

Ghilarducci: Well it’s a whole series of things. It is, of course, working with communities and homeowners to harden their community and their homes to make them more resilient. Ensuring for defensible space, working with our transportation agency to ensure that if you’re in a rural community, that they’re widening roads, where possible. They can allow for evacuation in the event that people need to get out in a fast way. And we’re just doing a whole bunch more public education, vegetation management, we’re building fuel brakes up and down the state, the list goes on. But this is all about beforehand. And we’ve also, speaking of targeting key funds, is that we’ve identified and understand that through all these disasters, we’ve seen, underserved and underrepresented members of our community tend to be the most, you know, disproportionately impacted by these kinds of events. So this year, in fact, we’ve focused almost $125 million into programs “Listos California” and “Prepared California” which really target underserved community members with education, grants, home hardening, and the like. So there’s a compendium of issues that we’re working on here. And we’re doing it in collaboration with other state agencies and our local government partners and nongovernmental organizations.

Brancaccio: Yeah, your work in advance and your work to fight disaster is expensive. And I’m sure you point out when someone like me says it’s expensive, is that the cost of the disaster happening is enormously expensive. So the cost of not preparing is very high.

Ghilarducci: That’s absolutely correct. So you can pay a kind of a lot to get us where we need to be on the front end of a disaster as prepared and resilient as possible, or you can pay twice or three times as much to rebuild and recover, [and] clear debris. And, of course, what is the cost of human life. So we don’t want these fires to wreak havoc in the communities as they have been. We want our communities to be more fire prepared and aware. And I think over the course of the last several years, I mean, look, we’re facing the worst drought in probably 1200 years now. Drought started here in about 2013-14 and it’s continued to progress. That has really wreaked tremendous havoc on fuel moistures and ground soil moisture levels, we’re seeing hotter days and windier days, but humidities are generally low. It all sets up a dynamic for wildfire in these communities. And it’s not something that’s anecdotal. We’ve seen 15 of the most destructive fires in the state’s history occurring, you know, since 2015, seven of those occurring in just the last two years alone. So this is a real, real situation. And it’s something that we are really throwing all hands on deck at.

Brancaccio: What about personnel to fight fires? We have a labor shortage nationwide, it’s affecting so many industries, can you find the wildland firefighters you need?

Ghilarducci: You know, when I started in the business many, many, many years ago, it was hard to get into the fire service. And today’s a little different, it is harder to find individuals that really want to step up and commit to that kind of work. We have really amplified the effort here in California with pay, with opportunity, with training, soliciting as much engagement with young folks as possible. Men, women wanting to work in the fire service and preparing for a career in that field. It is something that we have to continually watch. The pandemic really did add to the angst in that area and it’s one of those things where we’re still sort of recovering from that. It will take a few years to get there. In the meantime, we’re looking at not just traditional firefighters, but we’re doing things like engaging our California Conservation Corps members, we’re engaging our California National Guard members. We’re working with tribal governments now to bring them in and their firefighters to become part of our mutual aid system to engage and support it. So we’re really thinking outside the box. But as I said, this is really an all-hands-on-deck approach.

Brancaccio: It’s hard work, though, can be dangerous. Is the pitch, you know, it’s gonna be the money, but it’s also going to be, I suppose, if you ever wanted a job with a strong sense of purpose, this is going to be one?

Ghilarducci: I can’t disagree. It is dangerous at times. But you have a tremendous amount of training and you know, it’s the one of the most rewarding careers that one could have. And I spent many, many, many years in my professional career doing all that work, and it’s just been fantastic. So fire departments across the country are looking for good people. So please reach out and think about getting into a career in fire service.