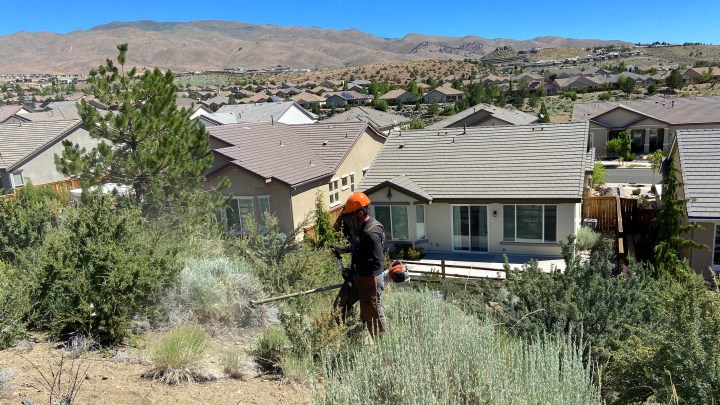 In a community tucked into the foothills of Reno, Nevada, a work crew slashes brush at the perimeter of homes. Their tools are not your average Joe’s weed whackers — they’re high-powered trimmers that send leaves and branches flying everywhere.

The crew is with a company called Wilderness Forestry, which property owners hire to create what’s known as defensible space — a buffer between buildings and the flammable brush and vegetation around them.

“A lot of times when the developers build the homes, you know, they build them right on top of each other,” says Bill Steward, the company’s defensible space inspector. “And there’s not a whole lot of space in between them.”

That’s why it’s all the more important that the space between homes isn’t flammable. “And make sure if a fire does start, it’s not just going to continue to rip through the whole community,” Steward says.

Wildfire season in the U.S. is generally longer and more intense than it used to be. And because of that, the fire prevention and home protection industry is growing. For example, the tree-trimming market has expanded to $29 billion. More businesses are getting into the “how do we survive fire season?” sector each year.

At the job in Reno, foreman Dustin Carlson uses trimmers on unruly sagebrush. He sees his work as the first line of defense to help firefighters.

“Giving them a safe area to get in and lay hoses behind houses, clearing on sides of driveways to make sure their trucks are safe,” Carlson says, “and getting in and giving them a chance to fight the fire safely.”

The potential for severe, catastrophic wildfire has only heightened in the drought-stricken West, where more than 6 million acres burned in wildfires last year. That’s roughly the size of Vermont.

Wildfire threats in the West have increased as more people move into the “wildland-urban interface.”

That’s where development and wild land collide; 69% of buildings destroyed by wildfires in the U.S. were built in these zones. In fact, more than one-third of the nation’s homes are in this interface, according to Jessica Gardetto with the National Interagency Fire Center.

“Unfortunately, a lot of people are moving to these areas who may not be familiar with wildfire and how quickly fires can move, how damaging they can be if you don’t have survivable space around your home.”

That’s why fire agencies are trying to get the word out about creating defensible space — and maintaining it. In some parts of the country, it’s mandatory.

California orders homeowners in fire-hazard areas to maintain 100 feet of defensible space around structures, but some people don’t comply because they think it will make their yards look empty and ugly.

“And that’s really not the case,” Gardetto said. “It’s just mostly about spacing out the existing plants that you have and keeping them green.”

Other homeowners simply can’t afford it. A 2019 study found that the cost of maintaining defensible space is the biggest challenge for those trying meet the requirements in California.

Recently, the U.S. Forest Service announced funding to help at-risk communities plan for and mitigate wildfire risks. In some cases, private landowners are eligible. But sometimes it’s up to homeowners to do the work themselves or hire contractors like Steward with Wilderness Forestry. And good luck booking him.

“It’s tough for us to keep up with demand. A lot of phone calls. We’re probably six months out right now, so far as taking on any new business,” he says.

Steward says the company is on track to double its annual revenue and number of contracts. So far, there haven’t been any major summer blazes near Reno this year. But he’s watched as California fires pushed smoke into the area.

“Luckily, we haven’t had a big fire around here lately,” he says.

But, he adds, it’s not a matter of if the region experiences a large wildfire — it’s when.